There's Life In That Old Goat Yet 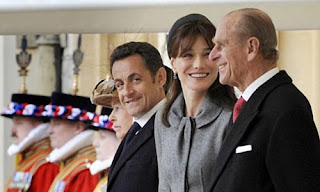 These pictures taken during the Sarkozy state visit to Britain made me smile. Old Philip, in his 87th year, is still as much of an oul rake as ever he was. And what of Sarkozy's sleekit sideways glance? He fully approves of his missus flirting with the Prince, doesn't he?

And then there's Her Maj - she just keeps on doing that stoic Queen thing. Bless her.
Posted by Nelly at 8:21 pm