Hi fans. Paddy here. I disremember the actual day I was pupped but, like Queenie, I have an official birthday and it is this very day - St Patrick's Day. It's four years now since Nelly and DeeMac sprung me from the Crosskennan Animal Shelter - and four happy years they have been for Nellybert et al. For it's damn lucky they were to be blessed with a fine animal like myself.

You know if it hadn't been for DeeMac (so beautiful, so wise) I might not have been living with the Nellyberts at all. Family folklore has it that Nelly was reluctant to pick me on the grounds that I looked too much like Danny. Don't know why that should have been a problem but as those who know her will agree our Nelly's a bit on the mental side. That's myself and oul Dan above. Which is which you'll be asking? Well I'm the young snake-hipped sexy looking one and Danny's the oul fat-arsed mental looking one.

Of course I wasn't here long before Bert accidentally ran Dan over with the van. Old codger was completely deaf, half-blind and crippled so was happy for him maybe. Even so we were all very sad. Them ones buried him in the garden and I often visit his grave to remember the oul fellow.

That's all for now folks. I'll look out some more of the oul photos and maybe do another post before long. Nighty night. 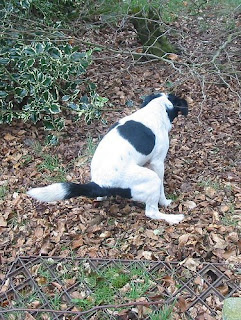 Me at Danny's grave

I just picked up your comment. Coincidentally I was, at the same time, listening to a compilation CD you made Bert and the track I was listening to had me remembering you vividly. It's a trumpet playing against a background of strings. Cannot place the track but I feel I should know it. The trumpet is achingly beautiful and makes me feel so sad - but in a good way. Just after that track there is a majorly dodgy Irish rebel type song that I've had to hastily turn off. This is Kells after all. Youse English haven't a clue about appropriate Irish music atall.

\the Tune is called 'Being Human' by Randy Sandke. Yep one of my favourite tunes, encapsulates what its all about i think Mary. Hope your all enjoying the easter break, send my regards around. JTF