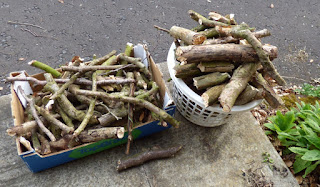 Above - some of the firewood that Evie, Martha and I collected from under the beech trees on Thursday. I was far too tired today to even take a single photograph never mind gather wood. That is what comes from attending two social gatherings in one day coincidentally both at the same hotel. The midday funeral reception were taken at the Dunsilly Hotel outside Antrim. The evening found us back at Dunsilly for a  wedding party. First go round we went in the front door, later on through the tradesman's entrance for we'd got a lift with the band. The backs of hotels are a lot different from front entrances I can assure you.

Sheena's funeral was very traditional, and very Tannaghmore which is just how she'd have wanted it to be. The choir sang all the old hymns, even a beautiful rendition of Tantum Ergo, a hymn I have always loved and which brought back memories of all the Benediction services we attended as children.

In the graveyard the subject of this blog was raised (it often is at funerals) by one of the cousins, who made sure to tell an old school friend all about its delights. This made me feel a bit worried as I was back in a comfortable way of thinking that there are just the three readers, Ganching, Grannymar and Brighid. And this oul blog is just a bit of nonsense I keep up out of a sense of duty.

How long have you been doing it?


Then I added, rather sadly,

And I never got offered a book deal.


And I thought to myself,

But back to the Dunsilly. The wedding party was excellent, lots of sparkling alcohol and nibbles. There were people of all ages from three months old to older than me. The craic was mighty. There were awkward moments. One when I'd just got myself a finger of wedding cake and then struck up a conversation with a very tall young man. I did not like to stuff cake into my mouth as I gazed up at him so held it casually in my hand. Then it started to melt. What else could I do but accidentally drop it on the floor and kick it under a chair. Actually there were probably a lot more sensible things I could have done but when the sparkling alcohol is in, the wit's out.
Posted by Nelly at 9:59 pm

Good that the order of things was a goodbye and then a hello.


I shall remain loyal and true to Nelly's Garden and the author,
Having not forgotten the many comments and kindnesses rendered when my blog was new.

Thank you Brighid. That is much appreciated.

And I'm reading too, always checking in and enjoying the photos from the new camera. I'm sorry for your loss of your friend, Sheena. I really like the middle picture of her with such a great smile.