Today was rather mixed up. Snow again this morning! I don't approve of this kind of weather at all. Then Clint called for Bert at a quarter past nine, his first words,

Is that brute still in his bed?


Apparently the vet was standing in Clint's yard ready to start testing cattle and Bert had promised to be there. Now if I knew I was likely to get a call first thing I'd be ready from dawn but not Bertram. He always reckons another few minutes snoozing will work out OK for him. I was doubly not pleased with my husband because he'd not told me about this and Thursday is my day for making two runs to town to pick up the girls from nursery (late morning) and primary school (early afternoon). I coped by walking down to Clint's, where they were all knee deep in milling cattle, throwing the house keys at Bert and stealing his brown dog and his van. I even had enough time to walk that brown dog for half an hour before collecting Evie who made me listen to Downtown radio on the way home. A far cry from the days when I could lull her to sleep listening to Radio 3.

Back into town for Martha at two. I had Ziggy to deliver to Hannah and Martha and I went upstairs to inspect the beardlessness of Fergus for such a thing might never be seen again. Martha persuaded me to go to her favourite charity shop as she needed a new onesie. There were two. Martha preferred one, I preferred the other. We bought my one. It's miles too big and I'm to take it up. Job for the weekend.

I was, this afternoon, in what Matty used to call 'a bad twist'. For why I'm not certain. Because it was so cold? Because I was being bored to death by someone and tangled up in dogs. Perhaps because I was cross with myself for thinking mean thoughts about the someone and his dogs. I need to do something about this but I'm not sure what. 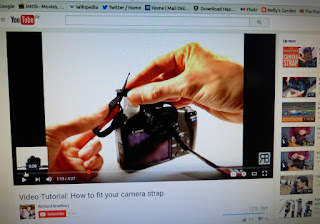 I hate it when I get like that, because then I really, really have to watch my tongue. Tis terrible my excuse passed away...

You know this post's picture is one of the sharpest, just beautiful clarity, and proportion!