Katy and family left to return to Norfolk this morning and I would be bereft if it were not for knowing that they had a wonderful wee holiday and that I will see them all again soon. Katy called this afternoon to inform us that they had arrived home safely and that James was racing around in his baby walker with a new appreciation of the saying, East, West, Home's Best. I think so too.

Leitrim Sister and I went to Antrim to visit our friend and found her in poor spirits, laid low with another infection. Afterwards we walked in Antrim's pretty Castle Grounds where we climbed the motte. 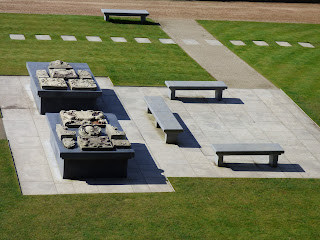 I took this photograph from its side. Apparently it is parts of the stonework from one of the original castles. I'm not entirely sure if it is the one built in the 17th century or not. There are bits of ruined castles dotted along the banks of Lough Neagh all over the place;  it seems that the Lords O'Neill were very unfortunate in their housing situation what with an accidental fire in the late 19th century and the IRA attack in the early 1920s.

Not much remains of the castle in Antrim but one solitary tower, but way back in the 1960s the ruins were more extensive. I saw my first flasher there. He must have heard myself and my school friend Sylvia stumbling, chattering in his general direction and as we turned a ruined wall there he was -  all phallus erectus, and an uninspiring sight if ever I saw one.
Posted by Nelly at 11:57 pm