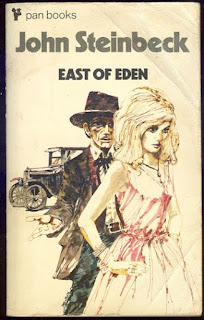 I got back into walking and listening to music and audio books. Dug out the iPod, it still worked but I'd totally forgotten how to use it. Thank Google for the internet. It taught me all I needed to know. First day I had it out  I couldn't even remember how to shuffle and was condemned to listen to a lot of Massive Attack. Got bored with that and re-learned how to load music. I don't do iTunes, hate how it's always persuading me to buy stuff. Uploaded the Carolina Chocolate Drops and Odetta. Blown away by Odetta.

Audio books. Wolf Hall. I have the book in the house, Bert loved it but I just couldn't get round to it. I enjoyed listening to it. Next was On The Road by Jack Kerouac. Never read it, although it's been on my shelves for a very long time. On The Road  put me in the mood for Steinbeck. But first I listened to Jane Eyre which I'd read as a child. I started with a Librivox edition, volunteer recordings. As always with Librivox, some of the readers were dire and there were ridiculous and irritating pronunciations. Who wants to listen to an American college girl pronouncing Hebrides as Heb-Rides. Not I. I found I'd already got a better version on my hard drive and abandoned Librivox. Then Bert had been reading (for the first time) Steinbeck's  East of Eden and he loved it. I'd read it twice before. The first time I picked it up was when I was still in primary school. My Uncle Desmond had a big collection of Reader's Digest condensed novels and I used to peruse them looking for the ones with pictures of animals or children. East of Eden appealed to me. There were illustrations of Cal and Aaron Trask as babies being bathed out of doors by the Chinese servant Lee. It got even better when the girl child Abra was introduced. I read the whole thing even if most of it flew over my head. Abridged novels usually leave out the juicy parts. My lord! I had no idea what East of Eden was leaving out. I read it again (complete version) in my late teens and could hardly believe that I'd read it as a child.

I always knew I'd get back to it some day. Listening to the novel has been exhilarating. I remembered a good deal of it, especially the parts that related to children. I knew that Abra was going to throw that rabbit package away. Back in my young days I really felt for Aaron and thought Abra a brat but now I understand her better. Today as I Dutch-hoed and prepared beds for Spring planting I listened to Lee tell Adam the story of his beginnings. That was a rough, hard story. It went over my head as a teenager. I couldn't have comprehended such an atrocity at that stage of my life.

I was first attracted to the book by the illustrations and descriptions of children. Now in my mature years I am delighted by the older characters, most particularly Samuel Hamilton and Lee, I even have a soft spot for Liza Hamilton who took to drink in her later years after a life-long abhorrence of alcohol. It turned out that it is OK if it is medicinal and is taken with a tea spoon.

I've read nearly everything that Steinbeck wrote. Notable exceptions are The Pearl, The Log from the Sea of Cortez and Travels With Charley. I have them all sitting waiting for me. And there is still the last part of East of Eden which, happily, I don't recall apart from something regarding soggy lettuce. And I'm hopeful of a miserable ending for Cathy.
Posted by Nelly at 11:50 pm