The thing about this daily photograph is that it is supposed to be taken with my new camera and as today was just a wee bit hectic I just went over to the corner of this room I'm sitting in and took a picture. That's a spare office chair which Les donated to the hoard and it's covered with a hammock I bought from Lidls many years ago. The cushion was made by Leitrim Sister and the bear was purchased in Burnham Market the year Katy got married. 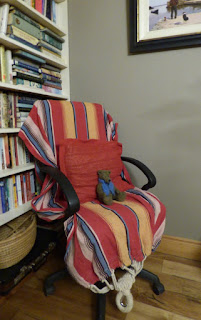 Martha and Evie were supposed to have a sleepover on Friday evening but it was cancelled because Sheena's funeral was an early start on Saturday. To make it up to them I said I'd make a special meal today. Monday is Zoe's gardening day and I always make supper. Because Evie missed out on the funeral (too young) she got to choose the menu.

Martha had particularly enjoyed the funeral reception. She never knew there were so many chicken goujons in the world and even went up for a second helping. Of course, she went home and told her sister all about it and poor Evie was raging that she'd missed out.

Zoe told me that they both really loved hot dogs with ketchup and Heinz tomato soup so that's what I prepared. But Martha was miffed. Apparently the menu consisted of Evie's favourite foods and not hers. She didn't like soup out of a tin, she only liked home made tomato soup. And she didn't want hot dogs. So we had a chat. Next week she gets to choose the menu and we're having pepperoni pizza and, for pudding, cake with white icing and sprinkles. I'm adding salad and garlic bread to the pizza and custard to the cake. The week after that it will be Zoe's turn to choose, then Dave's, then Bert's. I know what Bert will choose - mince and onions with spuds. When it is my turn we're having beans on toast.

Tomorrow I hope to get gardening and I might even take a photograph of the pigs.
Posted by Nelly at 11:37 pm

those girls will keep you young!

Oh they do! An old friend said to me the other day, "If I'd known how wonderful grandchildren are, I'd have had them first!"