There will be more posts (I promise) when I get my new camera. That would be the one I ordered late in the evening before Easter Sunday, two weeks ago today! Jessops promised next day delivery but I didn't expect that, not on a holiday weekend. It might come on the Tuesday or Wednesday. I was very excited. Still waiting and the amount I've spent on ringing up and giving off has probably cancelled any savings I made from buying on-line.

One of the customer services people assured me that the problem was they couldn't send the camera direct from a shop because it was being 'delivered to Ireland'. This was most amusing to me. I know this is Ireland, my heart tells me so, but politically and postally we are  part of the United Kingdom and Northern Ireland. Another customer advisor assured me it would be delivered yesterday and it wasn't. Then a sweet girl said she was sorry for the mix up and promised me it was being sent from Belfast this coming Monday and I should have it by Wednesday. Belfast! I've been in Belfast twice since I ordered the damn thing. I could have been out there snapping away for over a week by now.

Still, as they say, a first world problem. I still have three cameras although two of them are shite. The one that isn't shite is an iPad and I only like to use it at home as it is unwieldy.

But it would have been nice to have had my new camera to take photographs of our solitary chick, the one that was part of a clutch that the two bantams, Honey and Flour were fighting over. 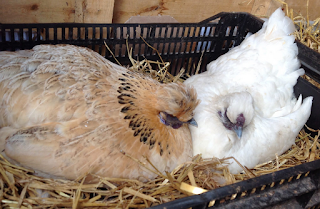 On Easter Monday morning Flour left the clutch, to eat and drink and Honey got on the eggs. I thought nothing of it and went to an eye appointment in Belfast. When Bert picked me up a few hours later he said there had been a calamity. He'd heard angry squawking coming from the inside and found Honey and Flour fighting viciously. The first egg had hatched and they appeared to be fighting over the chick. It was bloody and injured. Bert removed it and brought it into the house where it cheeped plaintively. It was marked on the back and near its eye and we thought it would probably die. Meanwhile out in the house the eggs had been abandoned. The bantams were separated. I considered hand rearing the chick but decided against it. Too much time and effort for a poor return. We offered it to the quarantined Honey who tried to peck it. Honey was put back with the flock and Flour put in the spare hen house. We tried the chick with her and she raised her wing and accepted it. And that was nearly two weeks ago. 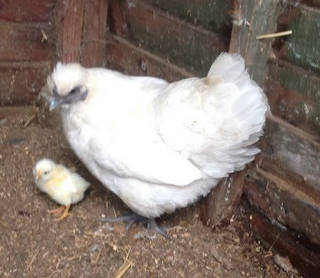 A lesson has been learned. Next time they go broody we'll separate them from the flock and each other. That way there will be no adding to the clutch and no fighting. And maybe, next time, there will be more than one hatched. I still don't know if it is boy or girl. If it turns out to be a rooster Leitrim Sister might take it. After such a poor start it deserves a crack at life.

And that was another place where I could have used my new camera. Three days in Lovely Leitrim (and Sligo) at the beginning of the week and nothing but my ancient Canon for company. I did take pictures but they didn't delight me. But Leitrim, Sligo and Enniskillen did, that and the company of Leitrim Sister* and Yer Man**. Sorry to hear about your hens and the chick. Hope it makes it.
Waiting on shipping can be frustrating, I recently sent a pair of cowboy boots to a niece and the tracking showed them going everywhere before they finally made it to her house in Nevada.

Sometimes it all goes wrong. I'm really going to appreciate that camera when I get it. Chick looks OK, two weeks old tomorrow. Keeping fingers crossed it gets to grow up.