All The People I Talked To Today

I might try to blog every single day during the month of September which won't be easy as I am practically brain dead and the only thing I am any good at writing is lists. The other day I found my husband sitting in front of my screen perusing my To Do list with a quizzical look on his face. I was displeased and a little bit embarrassed. As soon as he left I opened a new sheet on my spreadsheet and entered some words.

The next day while I was organising my digital images into folders he crept up behind me and peered over my shoulder. He does this a lot and I'm not keen on it. I said,

Are you looking at what I'm doing?


And without any shame he answered,


And flipped the screen. 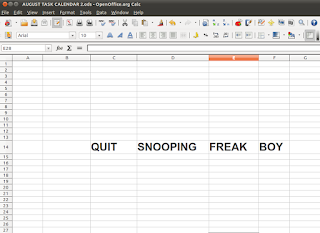 But I know he really thought it was hilarious.

To begin this month of daily blogging I offer a list: Some names have been changed to protect privacy.

All the people I talked to today in real life

1. Bert. We talked a lot. No serious conversations. Lots of laughing and saying, bah, bah, bah which is our new joke. I may explain this later.

3. Evie. She was almost too excited about beginning her academic career to talk about anything much except maybe cats and hunger.

4. Martha. We discussed music and dancing. She said she likes Irish music especially when it is fast and bouncy.

6. A young man in a coffee shop. Geeshie Wiley. He brought the subject up and I was very impressed. We also talked about people falling out of tree houses and what can be done to avoid litigation.

7. Bilrus. We talked about families, life, Game of Thrones, politics and small man syndrome. Bilrus is a very tall man with a very small boss.

12. A Wildling. The misadventures of small dogs.

13. Rod. Families, music, mutual friends, food, dogs. He had supper with us and said he didn't mind that the lid of the pepper pot fell off when I was seasoning the cabbage. Said he liked pepper a lot. Said yum-yum. Then he played his guitar.

14. Les. We had a discussion about a mutual friends experience of bullying in the work place. Food, families, music. Then he played his guitar while Bert played the clarinet.

Quite the list, i had none but two to talk to.

I'm happy for every day blogging. I've decided I need a news sabbatical so I'm starting with a week to see how it goes. More time for blogs and Instagram.

Brig: It was a particularly sociable day.Susannah: Less news and more blogs and Intagram sounds like a good idea.