No Need To Apologise Revisited 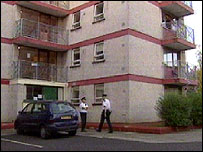 Can it be ten whole years ago that I worked in that godforsaken hostel in Dunclug? The one that has been evacuated, knocked to the ground and grassed over. Such stories could be told and here's one of them from 2006. I hope that poor Eamonn straightened his life out. It's far more likely that he is dead and buried by now for he was a terrible martyr to strong drink.


No Need To Apologise

This good woman has got a poor cratur from Cashel* sitting in her office and he’s telling her how he’s starving, hasn’t a cent to his name, hasn’t ate a bite for four days and how there’s all these young boys outside torturing him and he doesn’t want anything to do with them, he just wants a quiet life and a new start.


So Eamonn you’re starving and you haven’t eaten for four days? Where’d you get the money for the drink then?

Sure a boy I met on the train give me the drink.

Right. Would you like a cup of tea and a bit of toast?


So the good woman and her colleague the good girl make the poor cratur a cup of tea and a bit of toast and he seems happy enough. Then he notices a television sitting on the floor.


Could I have that TV? Sure I haven’t even a radio or anything to put the evening in.

Well I’m sorry about that Eamonn but that TV belongs to someone else who has moved on. I couldn’t loan it to you. I’m sorry.

The poor cratur went on about this TV for longer than the good woman’s patience could stand and she tried to hurry him out. She offered to escort him to his flat as the young hoods were hovering about and had rang the doorbell several times wanting to know when that Eamonn boy was coming out. She noticed, whilst walking over, that Eamonn’s gait was awkward but put it down to hunger. But at the door of his flat there was a clatter and a great pile of CDs, DVDs and a DVD player fell at his feet. The poor cratur was very dismayed.


Oh my CDs are destroyed.

What are you doing with all those? Where did you get them? And what’s that you’ve still got up your jumper?

It’s nothing. I’ve nothing up my jumper.

You have. You’ve something square up your jumper. Did you take those things from the office?

I did not. They’re my own. Are you calling me a t’ief?

I’m not calling you anything. I just want you to explain to me why you’ve got all that stuff up your jumper and what it is you’ve still got up your jumper.

I’ve nothin’ up my jumper.

You have. I can see the square edges of it just there.

The good woman realised she was getting nowhere and as she had no real idea what had been in the bags in the office she knew she was on shaky ground. So she returned and consulted with her colleague the good girl. They saw that the bags of booty in the office had indeed been tampered with. They decided to return to Eamonn’s flat to give him the opportunity to redeem himself. Optimistically they took fresh black bags to receive back the purloined goods. When they came to the cratur’s flat they discovered he had company. Saoirse was with him but as they entered she disappeared into the bathroom.

She needed to go to the toilet.

Tell you what Eamonn. Give us back the stuff you took and we won’t call the police.

I took nothin’. Call the Guards if ye like!


At this point the cratur took his phone out and after punching in a few numbers he started shouting,


Mammy! They’re sayin’ I’m a t’ief. Tell them Mammy I never stole anythin’ in my life!

His charade with the phone complete he continued to brazen it out. His accomplice remained hidden in the bathroom.


I’m not a t’ief. It’s terrible you’re saying that about me!

I’m not saying that about you. I can’t say for sure that you took those items from the office but then again you are not giving me a good reason why you had them hidden up your jumper.

It’s because I have no pockets!

Are you goin’ to apologise for callin’ me a t’ief?

I tell you what. If you’re still here in a month – and you haven’t stolen anything - then I promise I’ll go down on my bended knees and apologise to you.


There was never any danger that the good woman would have to keep her promise for the following day the poor cratur was taken away in handcuffs, in the back of a police Land Rover, after being arrested for thieving! Just imagine the good woman’s feelings.

But that’s another story.

*The cratur was not from Tipp. Certain names and places have been changed to protect the innocent.