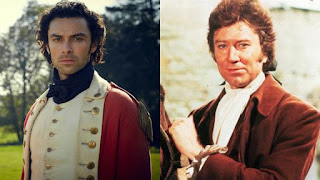 Bert found himself in a dilemma this evening.

What will we watch tonight? Victoria and Poldark are on at the same time. Should we watch Victoria first then catch Poldark on iPlayer?


I didn't care and would have preferred Game of Thrones, Season 4 Episode 6 but didn't like to say. I know how he gets on Sunday nights. So I said,

What do you want to watch?


So Poldark it was. There was Aidan Turner all sweaty and shiny, showing off his gym-honed bod as he chiselled at the inside of a copper/tin mine searching for another lode. And all the other miners fully dressed shaking their heads at him as he frantically hammered. That Cap'n Ross. He never gives in. And there was George Warleggan (the snake) looking remarkably like my ex-boss and Demelza shaking her auburn curls (not a patch on Angharad Rees) as she marched the cliff again. They're never off that cliff in Poldark. Galloping it, walking it, gazing wistfully out to sea on it. Mind you, If I had a cliff like that near me I'd be on it all the time too. Just not so close to the edge.

There was the obligatory love scene. Ross all tanned from his frequent shirtlessness and Demelza pale as milk. Gentle kisses. Married sex. Yawn. Next morning she wakes, turns to smile at him and realises he's outside chopping wood. Bert says,

Why is he in the middle of the field? Be far wiser doing it close to the house then he wouldn't have to carry the logs so far.


Maybe he didn't want to wake Demelza. He's considerate like that.


Every other day of the week Bert watches manly stuff. The News. The Weather. Farming programmes. Shows about Hitler. Gritty films. YouTube videos about pipe-smoking. Then on Sundays he turns into Walter the Softy. Poldark, Call The Midwife, Downton Abbey. He was heart-broken when Downton finished. No more Lady Mary, he loved Lady Mary.

As for me - I much preferred the first Poldark, the one from the 1970s with the delicious Robin Ellis and the peerless Angharad Rees as Demelza and I never recovered from the loss of Hamish Macbeth. Sunday evening telly, there's something about it. Get a good show and you'll never forget it.

I adored the original Poldark and was totally team Demelza against that milksop hoity toity one.

In the original You'd never forget that Demelza came from the gutter. I liked that. Also, new Elizabeth is nothing like as aloof and beautiful as the original actress.