One of my plans for September was to write a daily post to Nelly's Garden and it seemed to be going fine until the 17th of the month. On that particular evening I was feeling extra tired and the very idea of dragging myself into my private, secret sitting room to write was wearisome indeed. Instead I posted this to Facebook.

Was going to write a blog post every day in September but then I got this nice bottle of red and the craic was good and I realised the internet is not the boss of me! Well, maybe Facebook is - a little bit.

Of course I thought I'd just miss the one day...

Then I read Oliver Burkeman's column in yesterday's Guardian. This paragraph resonated with me for I am always making complicated lists and plans that never succeed in the way that I'd hoped. They actually make me feel like a failure most days.

When attempts at unbending discipline fail, I turn to a post the Buddhist teacher Susan Piver wrote in 2010, entitled Getting Stuff Done By Not Being Mean To Yourself. It relates her own frustrating attempts at rigid scheduling, and the approach she chose instead: asking what she felt like doing.

So today I did keep asking myself what I felt like doing and at one point in the mid afternoon I realised that what I really wanted to do was go to bed and nap. Which I did, and then when I got up about an hour later felt really refreshed and did lots of things without once consulting a list. And I even updated my blog. 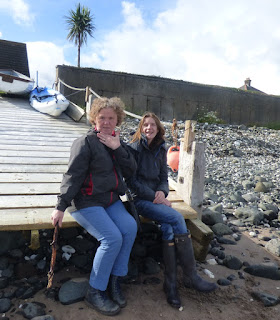 We all went to Waterfoot for a walk on the beach.

Dogs and daughter
Posted by Nelly at 10:08 pm

I have been a failure at my lists, and rigid scheduling in the past, now I fly by the seat of my pants most days.
Will have to take the time to read "Getting Stuff Done" post!

Seems like scheduling doesn't work for creative types like ourselves Brig. I'm just back from driving the youngest to town for her six am shift. I've got the groceries and now the thing that appeals to me post is another hour in bed!