On The Kindness of Strangers

I am not the kind of person who feels the need for the latest phone but, several years ago, a young friend who does feel a need for the most up-to-the-moment gadget, sold me his old iPhone. This phone came complete with something called a Griffin All-Terrain Survivor Case. It wasn't elegant. It looked like it ought to belong to a macho building site worker or maybe a mountaineer. I kept the case despite its ugly appearance because you'd never know when something bad might happen. Since then that phone has survived several falls on to hard surfaces and even a winter's night lying in the yard outside our house. It rained that on night but not heavily. 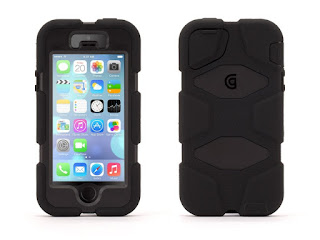 Not like the downpour that Evie and I were caught out in this afternoon. That was one of those sudden heavy showers that soak you to the skin after a few minutes. We were crossing the road, only yards from the van when it started and by the time we reached it we were both drenched. I could barely pull the car key from my saturated pockets in my haste to get Evie into the dry. We drove home singing 'silly songs' about rain and getting wet and when we arrived on our yard there were Caitlin, Cara and Maria over to play while their Mummy and Hannah went out for coffee.

First Evie and I had to get into dry clothes while Caitlin, Cara and Maria rang brass bells, banged Fisher Price pianos and blew harmonicas. Then the phone rang. British Telecom wanting to speak to Bert. I told them he was on holiday and wouldn't be back for a week. Next week I'll tell them he's in hospital, the week after I'll say he's in prison. I'd only put the phone down when it rang again. I'm still wet and the girls are still ringing bells, bashing pianos and blowing harps. It's a young woman, foreign accent, talking about a phone. I could barely hear her. Then I realised she's talking about my phone and she's on my phone! I'd dropped it. I was able to tell her that my daughter lived around the corner from where she'd found it and I'd be very grateful if she left it there.

Evie's dad brought it round later that evening. He said the finders were a young couple, very pleasant. I wish I could have thanked them myself. The phone looked OK. But it had been dropped in a downpour and there was water inside the casing. For the first time ever I took all the casing off and that six-year-old phone looked like it just came out of the box. It's elegant now but I'd be better to put all that rufty-tufty casing back on. You'd never know when I might be half way up a mountain on a very rainy day.

I find it really heartening that people are so honest. Glad to hear no damage done by the rain.