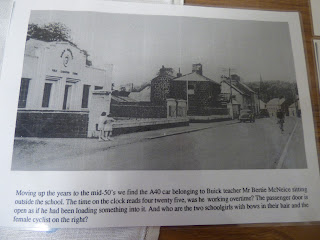 When Lizzie was here yesterday we got talking about a photograph of Pearlie taken as she cycled through Cullybackey when she was in her early twenties. Lizzie claimed that it had been made into a postcard. No one could recall where we'd last seen it.  So today when Bert and I called in at the Cullybackey Historical Society Open Day we were pleased to see that very picture. We cannot be certain it was Pearlie but the timescale fits and it looks like her. According to Bert his father didn't own a car back then so cycling or walking would have been her only option. I'm sure that's not true. Johnny is bound to have owned a car in the 1950s. How else would he have got to Portrush? And he was always in Portrush. Bert asked me if my father had a car back then.

Of course he had a car! He might have had to share it with his six brothers but they always had cars. Sure they had a petrol pump. They'd have looked well walking or cycling when they had access to free petrol. And how could they have courted girls on the far side of Randalstown without wheels? Not like your lot who wouldn't have walked the length of themselves for a woman. Folk who thought three fields away was a big distance!


And speaking of modern day petrol stations I have sad news to report for one of the guys in the garage has been rather dry with me these past couple of weeks. Normally he's all friendly banter which  I thoroughly enjoy. The first time I noticed he was a bit 'off' with me I thought he was distracted, maybe having an off day. He's been 'off' with me for a couple of weeks now and I think I must have offended him in some way. Perhaps because a couple of weeks ago I couldn't recall receiving change and when I queried it, it turned out I had. I should have been embarrassed but I wasn't and maybe that is the problem. Ah well. I hope he gets over it soon. I miss his banter.
Posted by Nelly at 10:00 pm

Interesting that you found the post card! My grandfather always had a car or one sort of another, as did my father. In fact, while my dad was in the service and doing his pilot training, they had him teaching all the city boys in camp how to drive.

My father's family were also early adopters of the motor engine. Also one of the first to use mechanised farm machinery while Bert's lot were still using Clydesdale horses.

Daddy told me that when he was courting Mum they had an American car which probably they acquired just after the war when NI was full of GIs. It had a running board and there was some elaborate story about someone jumping on it and falling off but unfortunately I can't remember the details.

Would love to know how that story ended.