Today Nellybert hung out with two of our oldest friends, the Wees. First, we attended the sixth birthday party of our friends' oldest granddaughter. Martha and Evie were also part of this event. Then we grannies and grandpas went to the funeral of a gentleman of our own generation. The Wee had been to school with him, Bert and I had another connection with younger members of the family. This man, was in the parlance of our country, very well-connected so his funeral was very large. Being well-connected in Northern Ireland usually means that a person comes from a large family. He or she will have been very well thought of during their working life. They often belong to clubs and organisations and being involved in music brings people flocking to the send-off. Our man loved traditional music and was a fiddle player. I saw people today that I haven't seen in years.

After the funeral, I collected my girls from their party which they seemed to have enjoyed immensely.

We were at a party ourselves on Friday evening - a friend's 50th birthday. The news of our friend's death came just as Hannah and I had returned from an enjoyable morning buying gifts (for ourselves as well as birthday girls) and drinking coffee in cool cafes. As is often the case, the news came via social media. Immediately spirits dampened and I thought - but we're going to a party. This doesn't seem right. Then I thought again. Our friend's dad was the life and soul of any party he was at. He'd have been dismayed at anyone not getting themselves out there and socialising. So out we went, were entertained to gipsy jazz, had a delicious meal and talked to people that we knew, folk we hadn't seen for decades and others we'd never met before. It was a lovely evening. 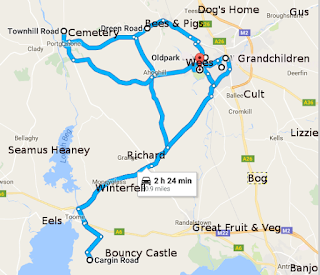 Ta Ganching. I'm hoping to offend a cultist. The boggers will understand.