It was the first day back at school for Martha and Evie and they bounced off the bus as happy as sandboys. I lost no time in telling them about my New Year's Resolution which was for them to watch less TV when they are at my house. They could watch cartoons half an hour before their Daddy collected them and that would be it. Straight away Martha started to negotiate with me but I was resolute. She accepted it.

Back home and she tried again,

No. We'll stick to the plan.

O.K. Then maybe we'll go on the trampoline for a while.

I was thinking about the trampoline today!


And off they went for around 30 minutes until they came in cold, Martha crying because Evie had knocked against her big sister's wobbly teeth with her hard head. Apparently, they thought it would be fun to trampoline with eyes tight closed.

Then we got the arts and crafts out and they spent a very happy hour making pictures along with Aunt Hannah. It was a pleasant afternoon during which Martha informed Hannah that television was 'being strictly restricted.' An hour later and after many pictures were produced Netflix was turned on and the girls watched Ben and Holly until Daddy arrived. 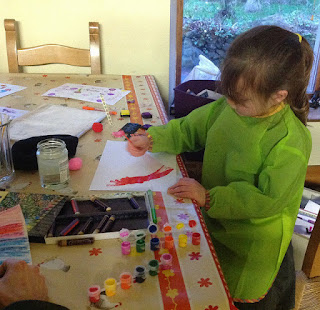 I have realised that too much television irritates them and they are far more fractious with each other. There are also many unnecessary cries of hunger. This evening food was not mentioned and they got on pretty well apart from the head-teeth collision on the trampoline. This is one resolution that must be kept. Television is fine as long as it is rationed and is not the only entertainment on offer. 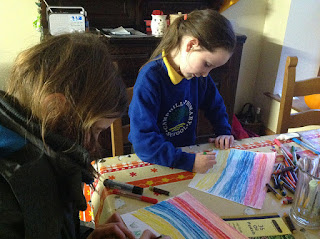