Tonight I prepared French Onion Soup, probably for the first time in over forty years. I don't know why I left it so long because I remember thinking it was rather fine the last time I made it, in Domestic Science (Home Economics) class, Antrim Technical College sometime in the 1970s.

The teacher we had, she was only a young girl, in her first job and she had very grand ideas about cooking. No plain soups or puddings for the pre-nursing class. We made chocolate profiteroles and other fancy stuff. Before Christmas, Miss S, to impress the other teachers, had us cook them a four-course lunch, turkey, ham, every imaginable trimming and a well-laced sherry trifle for pudding.  The centrepiece of the table was a pig's head, boiled and glazed with the traditional apple in its poor, murdered mouth. This was a feast very far from the simple (yet delicious) Christmas dinners enjoyed in our happy home on the Murphystown Road.

I'll never forget the sight of those teachers sitting down to that meal, averting their eyes from the pig's head and recoiling at the sherry trifle. I believe many of them were teetotallers and would have considered that dessert a sin on their souls. I only remember a few of them, John Bell, the headmaster, a Miss Something, horrible old cow that she was, Miss Law, best teacher in the school, a Mr Anderson, Math and Economics, jolly and sinister. Miss S, the Domestic Science teacher I remember very well but I daren't name her for fear of a libel suit. She was a card. Invited a group of us to her parent's house for coffee and homemade petit-fours and turned out to be an anti-Semite. I was shocked. She didn't last as a teacher after she developed a tremendous pash on a boy of seventeen, who she first tormented with smouldering glances and later with love letters. He was afraid of her and told his Mammy. Miss S was history.

I worked hard in Domestic Science and still failed the 'O' level, despite excelling at my practical. Miss S had neglected to put us through the less glamorous side of Domestic Science and I got a long question on drainage systems that I totally flunked. Most disappointing.

There was one other thing. We all broke up for the Christmas holidays after that lunch and somehow the pig's head got forgotten about. When we returned in the New Year, the stench that wafted down the stairs from the Domestic Science room was abominable. 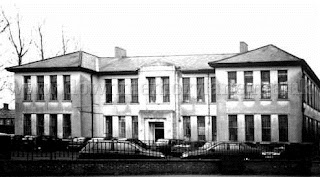 Antrim Technical College as it was when I attended. It has since been demolished.