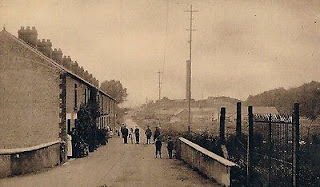 I am planning a visit to Belfast* for recent pokings about online has led to me discovering little snippets of family history on one those genealogy sites. Of course, I could register and pay for more information but why would a penniless not-even a pensioner** wish to do that when she’s in possession of a free travel pass and could do with a day out in the big city. Through reading these snippets I discovered that I come from a family of incorrigible lawbreakers. Don’t worry, Mammy’s ones – it’s all on the da’s side so far.

The great-grandmother set it all in motion back in 1906 and 1907 with several summonses for allowing drinking in her public house outside opening hours. It was to be hoped that when, in 1910, she transferred the licence to her son, our grandfather, that a more law-abiding era would ensue. Alas, this was not to be for the granda was in the papers a time or two himself for selling hard liquor after hours. It can only be assumed that they were at this kind of thing a lot as the peelers couldn’t have caught them every single time.

Then the young ones grew up and what a crew of villains they turned out to be. Never out of the news from 1939-1950. Out after dark with no lights on the bicycle, fined one shilling, shamed in the papers. That happened a lot. Then there were the motoring offences. The roads were a lot quieter in those days and, where we came from, chances were that the only vehicles on the local roads would be driven either by a police officer or one of the Byrnes. Easy pickings for the constabulory.

The authorities must have taken a very dim view of motoring offences as fines were massive. In 1941 Shemus*** (the da) was fined 15 shillings for having no insurance for a tractor and no brakes on the trailer. His brother was fined at the same court for some other piece of motoring villainy. Outlaws. The bobbies sure took no nonsense from the public in those days. 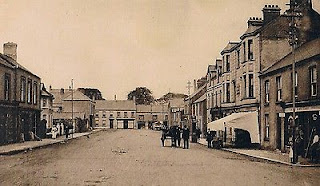 Meanwhile in Randalstown in 1924 a Constable Seay summoned five young boys, aged about 9 or thereabouts and hauled them off to a special Children’s Court. Despite their young age, they were named in the papers. Two of them were friends of my mother’s family. Their crime? Playing football in the street. What happened to them? I don’t know for I only got to see a snippet but the full story will be there in the newspaper archives in our local library. I do know that at least one of those boys died at Gallipoli whilst serving in the British Army.

Constable Seay must have been a terror to the people of Randalstown and about. In 1924 he charged an omnibus driver for allowing more passengers on his vehicle than were permitted by law. In 1926 he charged a Moneyglass man for working a pony in an unfit condition so, obviously, he wasn’t all bad. Seay must have had a soft spot for the animals for in 1934 he went after a man who shot a duck on a Sunday. He persecuted drunks from Toomebridge to Ballymena and, sad to say, was himself assaulted by a Mr and Mrs Clifford on the Twelfth Day in the year 1934. I believe the Cliffords were intoxicated.

Excellent and the McAnespie wickedness still to come

I might have to dig very deep to find a wicked McAnespie.