When it comes to soup there are only a limited number of recipes that Bert is prepared to try. He dislikes any made from root vegetables or squashes with the obvious exception of the potato. His reason for this is that he finds soups such as parsnip or carrot 'sweet' and, in his view a soup should not be sweet.

Nevertheless, I plan to work my way through 200 Super Soups with no thought to his odd preferences. Sometimes he'll like it, sometimes he won't. He wasn't too sure about yesterday's French Onion. That would have been the spoonful of sugar (to caramelise) and the cup of medium sherry. But last night's mild aversion to French Onion was nothing to the horror when Swisser served him a large bowl of vegetable soup made with carrots, parsnips and swede. I thought it was delicious and was particularly impressed with the aromatic spices she'd used, especially the ginger. Bert said that the ginger was the worst part and if he'd had to eat another spoonful he would have boked. I took the recipe anyway. He can eat weird Lidl fish on my root soup nights.

After lunch, we went for a brisk walk on Runkerry beach where Bert lost his mobile phone. He has some hopes of getting it back. It is absolutely worthless, being the cheapest and most basic phone in the shop so anyone finding it may well think it was thrown away because it is so crap. Anyway, I was more gutted than him, as only yesterday, I'd gotten him to put his accountant's number back on his phone after a year of asking him to update his contacts. Ever since he lost his last phone, back in September 2015 he's been getting me to look up phone numbers for him, numbers he should have put on his phone the last time he asked me.

Anyway, losing his phone with all the inconveniences that will bring him is surely karma for turning up his nose at Swisser's root soup. So, you may wonder, what are Bert's preferred soups? 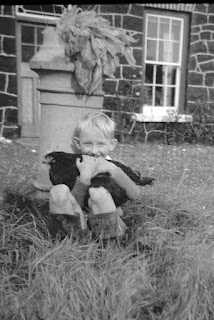 his all-time childhood favourite, chicken broth! Just look at the glee on that little face. Poor hen. She thought Bertie was her friend.