Travelling Back In Time

The other day I had a conversation with some friends about what we’d do if we had the opportunity to go backwards or forwards in time. Everyone, apart from me, was curious about the future but I’d be far too scared to know the future. Surely it would be far better not to know and retain some semblance of hope and optimism than to see the worst. I’d prefer to travel to the past.

So you could prevent Trump becoming President?

I think that one might be entirely outside my control. And, going by popular fiction, it might be a very bad idea to meddle in those big events. The only thing I’d change would be to unfriend that blade on Facebook before I ever got to see the picture of the poor, tortured dog that she shared.

No. If I had a time machine, magic wardrobe or whatever, I’d go back to around 80 – 150 years ago and I’d stay in my own locality so I could see what the world looked like to our recent ancestors. I’d enjoy travelling the old roads, streets and loanins to see how my grandparents and great-grandparents lived. I know it’s mundane but it’s what I’d enjoy and I’d try very hard not to interfere too much in their lives in case I screwed up the future a la Marty McFly.

So, while I wait for the mad scientist and his time machine I can search the newspaper archives to get a taste of the past and it seems that that’s a very dangerous and frightening place too. There was carnage on the highways at the dawn of the twentieth century. There may have little need to worry about motor vehicles – horses and carts could mow a pedestrian down just as efficiently as the horses were always bolting and when that happened it was advisable that anyone who could should run for their life. 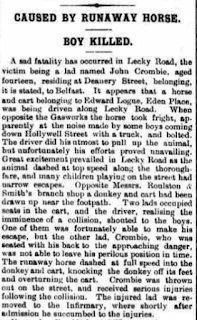 Also in the Derry Journal, October 1909. 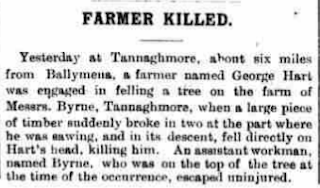 The fellow up the tree would have been my grandfather. His younger brothers would have been at college, Joe training to be a priest and James at medical school in Dublin. 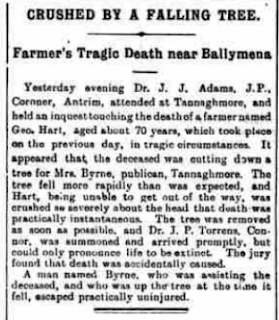 How come we never heard this story growing up?

There were probably lots of stories we never heard. Maybe great-grandmother didn't want it discussed.