Walk A Mile In Her Shoes 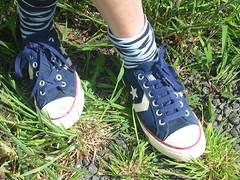 Swisser
Originally uploaded by NellyMoser.
Swisser visited us this afternoon bearing a gift of chocolate, which always guarantees a warm welcome at Nelly's.

She was complaining to Bert and myself that she feels driven out of her own home by her sons Charlie and Rob who are 17 and 15 respectively. She claims they eat at least £40 of victuals per day and are thoroughly undomesticated. They are huge, noisy and always there. Swisser has a busy career in academia but finds that her home life is a continual round of shopping, cooking and cleaning. She says she rarely has a chance to unwind. So we wondered where she could go to find some respite. The boys are quite capable of fending for themselves for a week or so but Swisser says that the state of the house when she returns is enough to fill her heart with dread and spoil the whole exercise.

After running through a list of possible escape plans I asked if she had considered sending them on holiday. "Of course!" she answered, "But they just won't go." As it was too late to get them into the Big Brother house this year, benefits being that Swisser can see what they're up to while she has total freedom to do as she pleases, for at least a week, the only other alternative I could suggest was to fit them up for a crime and get them committed to a Young Offender's Centre. "No good," wailed Swisser, "They'd just grass me up right back."
Posted by Nelly at 5:46 pm

i hope when i have children they will all be girls.

Yes girls are good - but boys are good too. Swisser is just going through a stage.

Get them a cheap flight to Amsterdam.Mick

I think she'd be scared they'd end up in the red light district. And they only childer!

She could see them doing something worthy like going on an architectural dig or helping the unfortunate.