Quite a few years ago at one of Hannah's parties (held in Nellybert's home, which is why I was there), a bloke called Danny started talking about this new show called Game of Thrones. I'd vaguely heard of it. Danny had worked as an extra on it and said it was really good, he thought I'd enjoy it. I said, didn't think so as I wasn't really that keen on sword and sorcery stuff.

But I was at a bit of a loose end so I thought I'd have a look. Danny told me which episode he was in and I did a bit of fast forwarding and spotted him straight away. It wasn't hard as he was the only blond in a sea of brunettes and he was standing right next to Catelyn Stark in the close-up shots. There was a sword fight between two knights and in the end, the bigger one prevailed. Big reveal - when the helmet came off, the winner was a woman,  Brienne of Tarth. The very same Brienne of Tarth that held on to her virginity for the most of eight seasons. I might have held on to mine that long if I'd been as handy with a sword as Brienne. 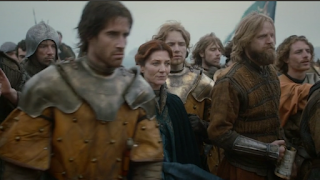 Danny is the one holding the horn tankard. I believe those scenes were filmed at the North Antrim Coast.

Anyway, although I had not a clue what was going on I decided to start watching it, beginning at the very beginning. It started in a very snowy place. There was a big dark castle. Three riders passed through the gate. They seemed nervous. There was some general talk. The one in charge seemed like an arsehole. I thought, don't know if I'm going to like this show, not one of these characters appeal to me. There was no need to worry for five minutes later they were all dead. Two at the hands of the White Walkers and the one that got away was beheaded by Lord Ned Stark.

Years passed and Nellybert became very involved with the show. We met other people who worked as extras, mostly Hannah's friends. The past four seasons Martha and Evie's dad worked as an extra. He fought at The Battle of the Bastards, The Battle of Winterfell and The Sack of King's Landing. 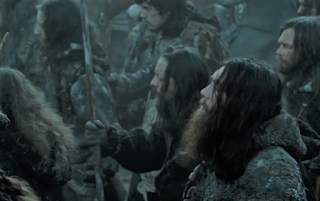 Dave Longbeard at the Battle of the Bastards.

It's over now, we watched the last episode tonight and I thought it was good enough. And all I can say is,