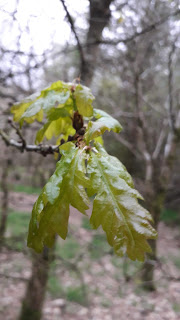 Bert planted the wood nearly twenty years ago, a few acres at what is now Clint's place and around 14 acres here at Springhill. By the way, no-one but ourselves and a few ancient relatives of Pearlie call this place Springhill. I think the name might have been chosen by the previous owner, Mr Kernohan. He was an educated man, a schoolmaster and there might have been airs. Teaching was a very respectable profession in Ireland, in the early part of the twentieth century. I must have airs myself because I like to use the name. It is a steepish climb to our place and there is a spring although that is somewhat diminished since the mains water went in.

A neighbour once stopped Bert and asked him when he planned to cut the wood down. He replied, 'Never,' and she was less than delighted to hear it. Her house is on higher ground again and she complained to Bert that since the trees grew up she and her other neighbours have been unable to see what's taking place on lower ground. Why she should feel the need is beyond me. It's just tractors and boy racers on the road and cattle and sheep in the fields. Same as her own road. 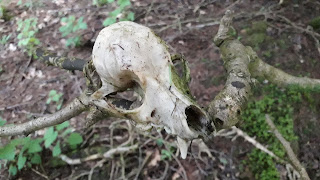 I've come late to appreciating the wood. Bert and Hannah both love it and Martha and Evie's Dad has built a camp in it. He uses cameras to capture film of wildlife, mostly badgers and foxes and over Easter they all had a sleep out. Zoe said it was hard to sleep because of the bird noise.

This evening I took the dogs walking while Bert finished grouting the kitchen tiles (Hurrah!) I went into the planting feeling very frazzled and came out feeling relaxed and happy. So that's surely a blessing. The first of the month.

And did you remember to 'pinch and a punch for the first of the month'?
The Golfer hates it if I get that one in first:)

I would love to have more land than our quarter acre block - not to be though. Enjoy your acreage and don't take any notice of those who would rob you of your pleasure.

I did not remember! Next month. There are a lot of people on my pinch list. Punching is too extreme, even for me!