That One Off The Telly

Last time you saw her Cersei had her chained in a dungeon with your one from Mia and Me.

What else was she in?

She was married to Stringer Bell but then his mate shot her.

After that, she lived in a flat in South London and guess who was in the flat below her?

Luther's mate. The one that shot her.

Did he shoot her again?

No. Frank Gallagher shot her. With a bow and arrow.

What he go and do that for?

She'd gone clean mad. She had the Queen Mother's corpse in the bath, whether she killed her or not I don't know but they'd been having some kind of abusive relationship and she'd the Queen Mum chained to the bannisters.

What goes around comes around. 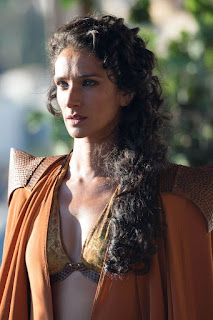 Sure there is nothing as cheery as a good box set.

Pleased to hear it. Have you watched some of those shows too?

I loved her in "Luther".