It's been a funny sort of day. Judy wakened me at quarter to six and because it was bright and sunny I got up immediately to let her and the rest of the pack out. My immediate intention was to return to bed and resume snoozing but on the way downstairs I recalled that I'd been dreaming about Nigel Farage so decided to make coffee and return to bed to drink it and read La Belle Sauvage. Too dangerous to sleep with big flappy mouth awaiting me.

When I did get up I started some gardening chores. planting out some anaemic looking verbascum phoeniceum 'Violetta' and a tray of safflower. Howard turned up and he and Bert breakfasted while I went out to try and find the secret nest of Madame Bianca (the white hen). Without any success, although I may have pinpointed the general area. After breakfast, Bert came out to assist while Howard threw tennis balls for the dogs. It was then I spotted the sick hen. I'd noticed nothing out of the ordinary yesterday but she looked like she was breathing her last today. I called Bert who said, "She's fucked." Then, "Maybe we should move her to the spare henhouse and give her a chance, see how she does." I picked her up very gently and nestled her in the crook of my arm. She seemed calm. I started to walk towards the other henhouse. Moments later a tennis ball whizzed past me, followed by three or four very excited dogs, The sick hen went frantic and tried to get out of my arms. Wings flapping, legs working. I got badly scratched. Then her neck flopped, wings and legs still going. She was dead by the time I reached the other hen run. I laid her down, wings still moving. Upsetting. I'd heard the stories about hens still moving after death but had never witnessed it before.

I was really cross with Howard. Exciting the dogs when I was transporting a sick hen. Then I realised I was actually cross with myself. She was obviously close to death when I first saw her and I should have let her go in peace rather than causing her to be terrified in her last seconds.

The afternoon was more gardening, planting out peas and a lot of watering. Also continuing to look for hen's nests. While I was doing that the hens that escape every day scraped up all of the verbascum and some of the safflower. Bert said,

You'll never be able to plant anything as long as those hens are running about scraping everything out.

You're quite right. We talked about this last week when it was decided that you'd fix the gate to keep them in the inner pen while you raised the fence. Perhaps you could do that sometime soon?

Later on, I went to visit a friend who's not been well and when I got back I watched the new Russell T. Davies about a dystopian future. Vancouver Brother rang. He said, when I finally answered,

I thought you weren't in.

I was watching a show and Donald Trump had just nuked China and I could hardly hear the phone for the sirens.

We also watched Virtues on Channel 4 with Stephen Graham. Excruciating in parts and terribly sad. Stephen Graham is an incredible actor.

So, an up and down day. The gardening was good, the hen thing was not and the TV shows were interesting. The phone call from my brother was good, our anxious, unwell friend not so good. But the sun shone all day and a summer cold that has been working on me for a few days seems to be getting better. I'm looking forward to more Philip Pullman at bedtime and it is to be another warm dry day tomorrow.

Which means lots of watering. Ups and downs. 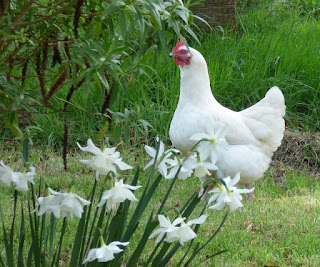 That's a beautiful hen. I'm hoping that he fixed the fence and all is well.

It might be a day or two before that fence gets fixed Mage. I'll just have to be patient.

You shouldn't be angry with yourself about the hen. You just wanted it to be ok and maybe dying of shock was better than a slower death x