No blogs posts for two days in a month when I'd promised myself a daily post. So what did I do instead?

A lot of coughing, especially during the night when I'd wake myself up. Then, to make up for that, a lot of napping during the day. I had a low-level summer cold exacerbated by hayfever and it had settled in my chest. Inconvenient and exhausting, not at all life-threatening.

Yesterday there was a little drama. After a night interrupted by coughing I was awakened by a cacophony of barking at around six. Grumpily got up (Bert never hears it) and let all four dogs out, left the door open and went back to bed where I managed to sleep for another hour until wakened again by some really unnecessary barking from Ziggy and Jess, both of whom were perched on my bed woofing away. They got a harsh telling off from me and I dropped off again. At nine Bert got up and informed me that four dogs were now five. Milling around with our own pooches was a very handsome and friendly black labrador.

No collar, full set of balls, great condition, lovely temperament. Highly unlikely that this was an abandoned dog. But where had he come from? I checked social media and no-one had reported a missing lab. We took him to the vet to check if he was chipped. He wasn't. I thought this was compulsory? Maybe it's not. The vet was really helpful, knew all the right people to call. They actually went through their own records and called all the male lab owners. We tried out names on our foundling. Are you Marley? Oscar? Bob? He did not respond. It was the call to the dog warden that did the trick.

On the journey home the council called and the dog's minder was in the yard before we'd got him out of the back of the van. Turns out he wasn't a local dog at all. The man who called for him was local and he'd agreed to look after the lab for a few days while the owner was on a fishing holiday. He'd picked the dog up the night before and he'd escaped his pen soon after. The man and his wife spent hours looking for him and had yet to inform his owner. As friendly and handsome as the black dog was we were still really glad to see him safely off the premises.

So what was his name again?

That's not a name. 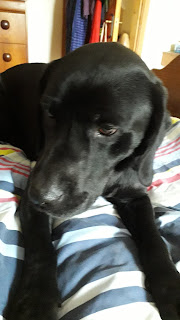