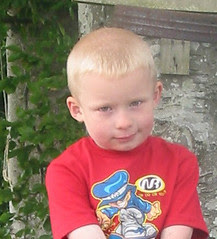 Ben
Originally uploaded by NellyMoser.
We were going to go for a walk but it was too wet so Jazzer, Ben and I set off for Belfast to look for a shop that supplied linoleum. But we couldn't find it so went to the Ulster Museum instead. Ben's got a bit of a thing going with dinosaurs.

We spotted lots of newly fledged and robed QUB graduates wandering around with their proud families and that was very lovely. I felt proud of them too and I didn't even know them.

When I'm out with Ben I practice my grandmothering skills. I reckon I'll be very good at it by the time I get some of my own. I'm working on a mixture of fond indulgence and old-fashioned strictness. For instance I don't let him interrupt adult conversations but I always get back to him.

He was an awful prat in the Museum shop. Couldn't make up his mind which dinosaur he wanted.

I told him that all the food in McDonald's is chewed and spat out by other people before we get to eat it. I think he might have believed me but then again he knows I'm a terible liar. But at least we got out of going there. You know that magic word that children are always forgetting? I've got an even better one. Don't say it always but often enough to keep them from being spoiled brats. It starts with N and ends with O and it spells NO!
Posted by Nelly at 10:06 pm

All the food at McDonalds is chewed and spat? Oh no!
Oh well, I have to keep going there anyway because here they have indoor, air conditioned playgrounds, and the summer temps are over 100 F. Yikes! Guess I'll just have a soda next time. :-)

Far better for you. As we say in Ireland (or at least I do)- McDonald's is rank poison. They're bloody good at marketing to kids and their harrassed parents - that air conditioned playground would have tempted me too when my sprogs were little 'uns.