View from the Kirk Homeplace 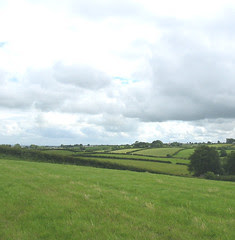 View from the Kirk Homeplace
Originally uploaded by NellyMoser.
I took three walks today. First one was the Cully one with Paddy that I've mentioned already. Listened to baroque.

I took Rosie on the second one and took some photos. If you pop over to Flickr you can see where our new house is. I listened to the CD compilation
that Mikey gave Bert for his birthday.

This evening Zoe and I went to Mass in Tannaghmore as it was Daddy's Month's Mind (a special mass said about a month after someone dies) It was also Uncle Kevin's (Dad's brother) first anniversary. Afterwards we went to Matty's for supper.

When I got back I went on my third walk to look for Paddy and Rosie who had gone off scunging again. I listened to Sidney Bechet. I didn't find the feckers but they're back now anyway.

My legs are sore. But then I did take 15ooo steps and many of them over rough ground.
Posted by Nelly at 11:26 pm

Well done you! I think i walk for about 20 minutes a day! In noticed you didn't give an opinion of my hard laboured CD-my favourites were the Tiny Dancer cover and the 2 by my mate Rob - he's awfully talented!
mikeyboy x

The ones by your mate were totally brilliant and you can tell him I said so. And I liked Dave Grohl's version of Tiny Dancer. Sorry I do not like ABC. Never have, never will.

I'll tell rob- he's building a website at playrob.com. Sorry, am i missing something? ABC? think i might have put on a wrong song-dont know any abc, 'cept the look of love'.

Ahem! Don't like Spandau Ballet. Never have never will. ABC and them, they're each as bad as each other.