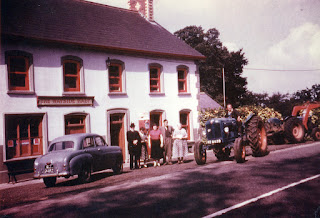 I really need to keep tonight's blog post short and sweet as it is a Saturday (Treat Night) and that means I am drinking wine.

Tonight's story is about connections. Northern Ireland is a very small place and, I often think, take us all far back enough and we're probably all each other's cousins and, never mind all that Protestant and Catholic stuff, I reckon we married and mated all over the place in days gone by and we're all mixed up.

When Hannah was a teenager she'd mention a friend of hers and I'd say what's the surname, and she'd say, Mum! You wouldn't know him/her, yet nine times out of ten, if she even knew her friends' surname I'd know who they were.

So, this afternoon her friend's father gave her a lift home and he got invited in for a cup of tea and we got chatting about this and that. I've met him before, he's a local historian and before long we were chatting about the war years (after my time). he tells me that he was in Belfast when things started to get a bit hot and heavy and his father moved them to a place called Tannaghmore.

Yes. It's about halfway between Ballymena and Antrim.

I know! It's my home place. Where did you live?

There's three little houses, I think there is more than three now, near a pub, Byrne's pub.

I know! Those three little houses (and the other one) where right at the top of the road I lived on.


Turns out he knew lots of people that I knew yet was gone from Tannaghmore 12 years before my mother got there and 13 before I was born. He even went to the same school my father attended. It's a small place, these six counties. All you have to do is get chatting. Incidentally,  the last time we chatted we discovered that one of his associate historians is my second cousin, once removed.