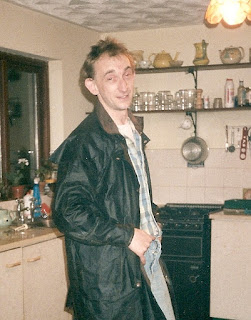 Many, many years ago Bert bought a Drizabone coat. They were all the rage for a while and I thought he'd look lovely in it. But, as it turned out, he rarely wore it and it hung around for a while and then it disappeared. I thought perhaps someone had spotted it lying about and nicked it.

Then I forgot about it until The Wee turned up wearing a snazzy Barbour gilet that he'd picked up for next to nothing in Bushmills. He said the wax he'd bought to condition it cost three times as much as the garment! I mentioned the Drizabone that had disappeared off the face of the earth and suggested that it had been stolen. For some reason I never, ever forget about stolen items even if the theft occurred 40 years ago.

There was the cheap camera that was nicked from my house in Ballee, the one that contained undeveloped photographs of my little ones and some gorgeous poppies. I yearn for those unseen pictures to this day. I still miss Bert's leather bush hat, a present from South Africa (the Wee again) for he looked so cool in it and there is never an Autumn passes that I don't resent the theft of three well-grown Stag's Horn Sumach from the poly tunnel.

But, back to the Drizabone.

That coat is still here. I found it scrunched up in the big shed. It's a bit mouldy but still dry inside.

I got him to fetch it in from whatever hole it had been lying in for a decade or more and sure enough it was covered in mould yet dry enough inside. I'm going to see if it can be returned to its former glory. Watch this space! 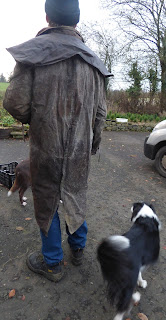