There was more gridlock today, but despite that, it was a good day.

We went to a Christmas Party, Martha, Evie, myself and Bert. Was at the Oldpark Road, with the girl's friends - Caitlin, Cara and Maria and our oldest friends Robin & Lorraine, also known as the Wees. The food was good and the craic was mighty, I'd forgotten how much fun hide and seek was, not that the grands played it, we just lied a lot as to where certain small people may or may not be hiding.

On the way back I headed for Cullybackey instead of Galgorm and there was Gridlock. I allowed a huge tractor and trailer in front of me just for the fun of it. As Bert said, it might cut a swathe for us. No such luck. The tractor and trailer pulled out, all optimism and the Peugeot van (us) behind it, all filled with Christmas spirit and then - everything stopped. Then - a steady stream of small cars driven by small people mounting the pavement and edging slowly past the tractor. All it would have taken would have been just one considerate, mannerly and decent soul to wait until the tractor, the Peugeot van, and a few other vehicles to pass and we'd all have moved towards our final destinations. What is it about Cullybackey drivers that brings churlishness to the fore? As always, there was the usual ignorantly parked drivers outside Boots the Chemist. This would be Boots that actually has an underused car park at the back of its premises. See sick people? See so called sick people with big free prescription needs? These are people that believe themselves to be so entitled. Let someone else pay for my paracetamol only 25 pence per packet at most leading stores. I'll park wherever I like. I'm an invalid. Who cares if delivery trucks and other humans are inconvenienced? Not I.

Enz-way - rant over. I'm glad I don't work in a chemist shop. I think I might get to suffer those killing people fantasies I had when I worked at that Dunclug hostel.

Which reminds me, last night's waking dream was Prince Harry dying from a wasting disease in a squalorous building and tended in his last hours by my brothers, Eamon and Joseph. What the hell's that all about?

Christmas preparation - presents wrapped and given. Party attended and human beings treated in a loving and Christmas-spirited manner. 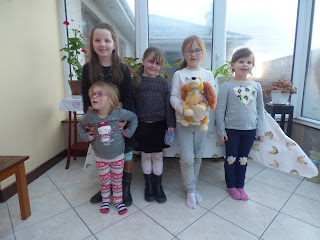