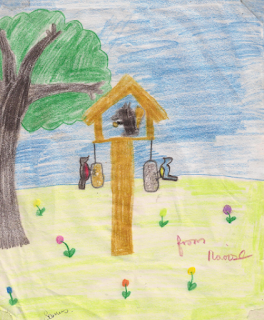 Over the past few days I've been sorting out a few boxes of mementos, bits and pieces belonging to my mother, Pearlie and myself. That drawing was among Matty's keepsakes. It is, of course, the view from her kitchen window and features her beloved birds feeding on the bird table. There appears to be a squirrel there too. The artist, Matty's granddaughter, was very skilled at drawing birds as they are very recognisably a robin and a blue tit. Her squirrel might have needed a bit of extra work as, at first glance, I thought it might be a small dog. But enough of my carping criticism - the picture is charming and Matty must have thought so too, to have kept it for at least a dozen years. 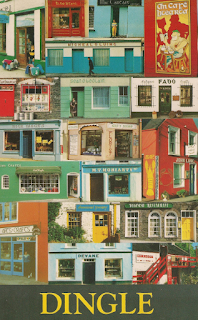 The postcard from Dingle was given to Matty by Katy so must be more than 20 years old. I wonder how many of those shop fronts are still the same. The last time I visited, nearly five years ago, An Cafe Liteartha was still going strong. 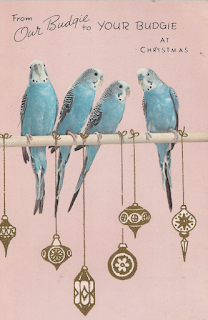 And this from among Pearlie's memorabilia - a Christmas card given to Bertie by his friend Thomas. Mid-sixties I'd say. Every home had a budgie back then and I believe every budgie was called Joey. Ours certainly was. According to Matty I thought anything with feathers (and feathers) was named Joey. Which explains the title.
Posted by Nelly at 9:04 pm