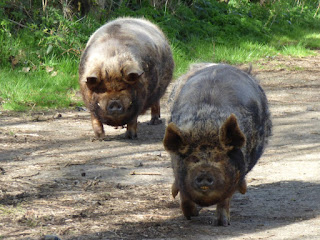 Rusty and Lily. Not on the menu...yet

Tonight’s menu featured Pea and Ham Soup made from a recipe of my own devising, using split green peas of a similar age to Miss Martha. The sell by date on the packet was December 2011. The ham is that same parcel rescued from the freezer where it had been languishing since Christmas 2015. I also made a carrot cake with some middle-aged carrots that have been hanging around since Saturday last. A week is a very long time for a shop bought carrot and there probably wasn’t a vitamin left but sure the eggs were freshly laid. Which will make up for it. Thanks hens.

It is good that we have embarked upon the eating of ancient foodstuffs as our continuing existence will give hope to you all when, in the coming apocalypse, we will all be far too poor and hungry to throw out perfectly edible food.

Take it from me, times are going to get tough. I don’t think I’ll ever get the pension I so looked forward to at eighteen when I would soothe myself to sleep thinking ‘only forty-two years to go’. And when the ravening hordes come storming up the road intending to stamp through our herb garden, steal our hens and barbecue Rusty and Lily then - our young friends, Bilrus, Dave, Ben, Peter and Locky will fire on them from the tree house with home-made bows and arrows. Dave will be the Chief Archer. If the ravening hordes get really cheeky we may have to get the heavy artillery out. I hope warning shots over their heads will be enough to deter the mob.
Posted by Nelly at 6:07 pm