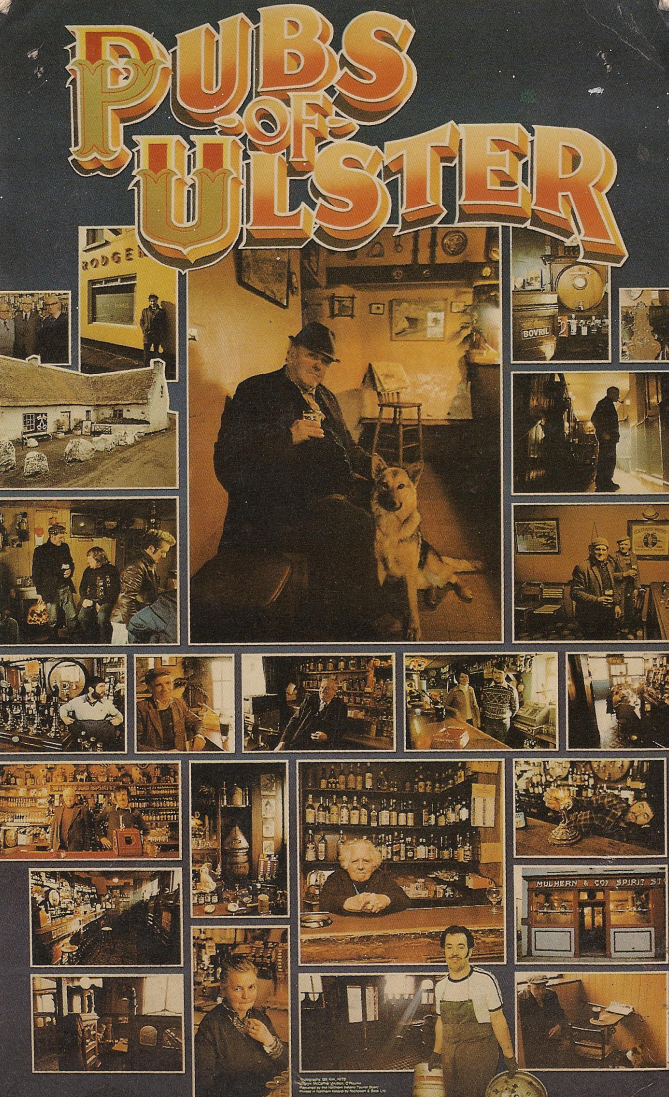 That poster (I had it postcard size) was for a Northern Ireland Tourist Board promotion and was the work of the acclaimed local photographer Bill Kirk. It dates from the late 1970s and used the olde worlde charm of our local public houses to draw visitors to this troubled province.

Now, at that time, I wouldn't have been that well-travelled around Ulster hostelries. Forty years ago my lot's idea of a night's craic would not have been sitting in some dingy, traditional pub with some sour-faced oul' doll behind the bar, looking like she'd far rather be at Mass than serving strong drink to a shower of ne'er-do-wells. We liked a young crowd, people like ourselves, disco lights, music and dancing and the chance of a pull.

Yet I know for sure that I was in one of those pubs, the Crosskeys Inn, near Toome. There are two pictures of the pub, an exterior (thatched roof) and (third one down from that), a shot of the proprietors looking just as respectable as members of the Protestant Ascendancy, which they most definitely were not.

Further research threw up the Causeway Tavern, near Bushmills and I suspect that the Crown Bar, Belfast is somewhere in there as well. I'm sure the lady with the updo at the bottom of the poster was a County Antrim publican but the rest are mysteries to me. I'd love to be enlightened.
Posted by Nelly at 9:08 pm

The third down on the right hand side is McBrides Bar in Lisnagunagh , now it has been expanded into what was then Hugh McBrides dwelling . It's called The Causeway Tavern now . McBrides Bar was a miserable place , where woman , if they dared to enter , were made to feel thoroughly unwelcome . The landlord was a horrid man who thought that hobbling his farm dogs was a reasonable way of keeping them in line .
We still haven't had your wine yet Mary , saving it till Peter's up at Christmas .

Thanks for that Denise. It is good to have a bit of first hand history about the place. And speaking of wine, just racked my first gooseberry. It will soon be ready for bottling. Hope you and Peter enjoy yours and feel free to come over for more!

'I'm sure the lady with the updo at the bottom of the poster was a County Antrim publican' You are correct that is a picture of Margaret O'Neill nee O'Kane, of Owen Roe O'Neill's Largy line, between Randalstown and Portglenone.

This poster sat of years sunbleached at the ferry terminal in Larne. The poster has since left the building on more recent visits.

Margaret was a great Aunt of mine and remember well visiting the bar many times as a child. The bar is close to the Crosskeys pub

Would love to get a copy / reprint of the poster if possible.