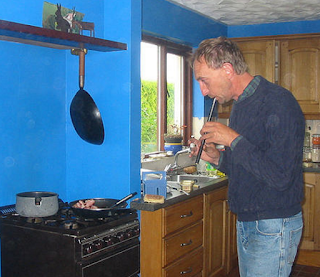 Bert whistles as he fries

Obviously I did not expire from eating historic lentils and sultanas. I even went back to the mulligatawny soup this lunchtime and it was even yummier than before. But - there was this defrosted package I wasn't too sure about. It was a meat thing, I thought it might be turkey, one of Clint's birds hatched and cooked in 2015 and hauled from the freezer near the tail end of 2016. But as any housewife knows flesh frozen for a year loses its looks and it turned out to be ham. I was dubious but Bert was gung-ho - let's eat this.

I wasn't keen but I was prepared to let him have a go as long as he operated to my strict instructions.

I knew I couldn't trust him to dice a carrot so I did that myself.

No Bert! Don't put the oil and onion in together! The oil needs to be heated first. 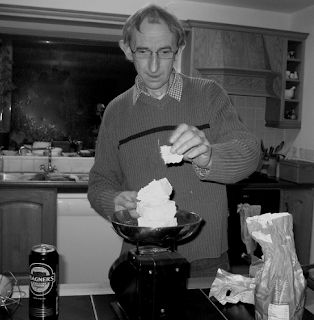 
Oil and carrot were softened, garlic added, then a bit of green pepper, a nub of chilli, some leftover spice mix found on the window sill, kidney beans and a can of pulped tomatoes.

I'll make a cook of you yet Bert.

I'm a brilliant cook. Better than you!

Because you never cook.

Well if I did I'd be far better than you!

I let him prepare the rice while I went to pick up Hannah.

How do I cook it? 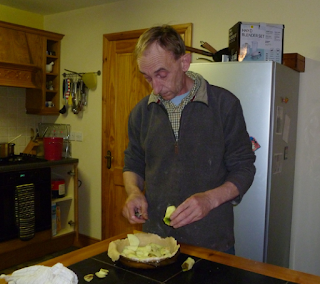 
You're a brilliant cook. You should know.

I told him and it turned out fine. And so was the ham and bean stew. But I really should label the stuff I put in the freezer. 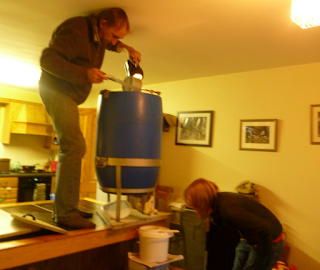 He's not actually cooking here. He's spinning honey from the frames but as he's in the kitchen making a mess, a very big mess, I thought I'd include it.
Posted by Nelly at 8:38 pm

Ha, I love this Nelly! Missing you all.

I'm looking forward to your daily posts, you are one of those bloggers who never blog enough.

Thank you Mikey and Anon. That is good to hear.