Ballymena is the town closest to where I live. I wasn't born there, I'm not from there but it's The Town. It's where my mother caught the bus to, once a week, to collect her Family Allowance. Not for her the luxury of letting it build up. It was a necessity to be collected every week as soon as it came due. Occasionally I'd accompany her. I remember how she rushed and how there was never any time to look in shop windows, to admire all the things we couldn't afford. Still, there were treats. She'd buy a quarter of sweets in Donaghy's shop in Linenhall Street and she and I would have one each, the rest tucked in her bag for sharing when we got home.

Ballymena is where I went to grammar school for three long and hateful years. The summer holiday before, 1965, was ruined by my anxieties about this move from the small country school that we were able to walk to. I was especially terrified of travelling on the bus on my own. What if I got on the wrong bus? Ended up in some far-flung place like Ballyclare, never to find my home again?

The bus wasn't as intimidating as I'd feared but there were new anxieties. What if there was no seat on the lower deck? What if the conductor made me go upstairs where all the rough Academy boys sat? That actually happened once and I was terrified until a big boy, David Allen, who'd gone to our country school, sat beside me. I'm sure he recognised my terror at being among these great oafs. He tried to make conversation with me but I was too shy to engage. There was another boy from our school on board and I remember the other fellows bullying him. David was standing up for him. He was as old as my protector but fat and poor and probably a great butt for their jokes. He was a very sweet and kind boy and ended up working in the Civil Service at a very high level. David Allen became a GP and practised in the village where I live now.

And later on, Ballymena was where I socialised and came to live and, in time, where I met Bert. It's where my children where reared until we moved to the country to live with Bert.

These days it's The Town and I am ashamed of it.

Like all small towns, it is full of decent people but there is also an element of xenophobic, racist and bigoted people who live in it and, unfortunately, they are the ones who seem to define the place. When Ballymena gets in the news it always seems to be for the wrong reasons. From being the heroin capital of Northern Ireland, to the savage sectarian murder of a 15-year-old Catholic boy, the years-long protests at Harryville Chapel, and then a DUP Mayor asserting that Hurricane Katrina was divine punishment for the existence of gays. And, more recently, we had Ian Paisley Jr. M.P., prancing up and down Ballymena streets exulting being let off the hook by his constituents after his suspension from Westminster. Worse still, Ballymena's racists have now attracted the attention of England's worst and we may well become infested by them. Is it any wonder I'm ashamed to call it my town? 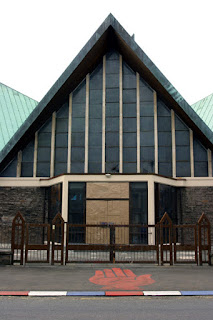 When I grew up there as a teenager and close/after the peace agreement there felt to be a new positivity in the air. Of course all sides have assholes but my friends and I didn’t feel any prejudice amongst us for the school uniform we wore or the church we went to. ( I felt sorry for the ones that had Sunday school 😂😂) it felt like change was happening. Music identity felt more important and spending time with people that were into the same thing as you, no matter what politics or creed. It just seems sad that it’s went entirely backwards. I went to St. Louis but my best friends went to Cambridge house. We would laugh and take the piss outta each other but 20 years later and we are all still friends. Though scattered around the globe. Northern Ireland needs positivity back. We very briefly seemed to stop hating each other but now it seems there is common enemies.. the outsider! it’s fucking sad. I’m proud to say I’m from Northern Ireland But embarrassed in the same measure. My long term partner is Eastern European and I love living in Scotland. Ballymena should be turned into a lake.

I'm from the generation before yours but, like yourself, my friends were from all communities. I believed that things were slowly getting better. I was naive. Despite my own mixed group of friends - I came to realise that there were people in the town who distrusted and hated Catholics. Nice to your face, vitriolic behind it. Facebook was a great eye-opener for me, for by their friends, shall you know them. It's easier now to know who is a sectarian bigot - they're the ones hating on the "foreigners."

That is a sad state of affairs, I suppose there are some people in the town who are very susceptible to this kind of campaigning - worrying

I'm optimistic enough to hope that they will be welcomed by the tiniest of minorities. When even the DUP don't want you... you must be very bad!

I had a similar experience going to school in Magherafelt. The vast majority were nice to your face but some where spitting bile about you on a Sunday or the middle of July. #gladimoutofit