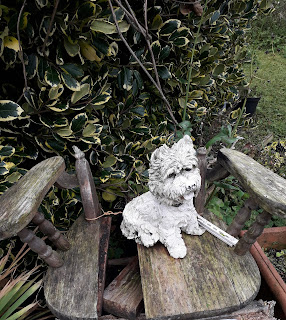 One of the sweetest things about living in a rural area is not having neighbours or, at least, not having them live too near to one's own place. For years Lizzie had the quietest of neighbours then a family moved into the house that shares a boundary with her own. She had little truck with them but, lordy, were they noisy. Lots of shouting children and barking dogs.* In the days when Lizzie was fit to go out walking with her own wee dog, she might well have made friends with the children but that never happened. I wouldn't be surprised if those children thought she was a witch. That's what I used to think about very old ladies who lived on their own. Too many fairy tales y'see.

Another thing I thought when I was a child was that lords and ladies were special, and better than us. Too many stories about kings and queens, handsome princes and beautiful princesses y'see. What they do to impressionable young minds is so very wrong. I recall one particular occasion when my Uncle Vincent challenged this belief. It was when he had us out for a drive along the famed Antrim coast road and, as was usual for him, lecturing us on geology, philosophy and history as we travelled along. At one point, somewhere between Waterfoot and Carnlough, he stopped the car to show us something. This was the Famine Memorial carved into the limestone rock that had been commissioned the third Lady Londonderry after the Great Famine. I read it, as much as I could for some of it was scratched out, and thought it very fine sentiment. Uncle Vincent begged to differ. He pointed out that the fine lords and ladies, and queens had done very little to assist the Irish people during the famine times. This is the part that was removed,


“An imperishable memorial of Ireland’s affliction and England’s generosity in the year 1846-47.”


Vincent was scathing about Queen Victoria's generosity towards her Irish 'subjects' which amounted to £5,000. Yet still a good deal better than the Londonderry family contribution - £30 while, at the same time, they spent £150,000 refurbishing their Irish estate, Mount Stewart in County Down (which I was pleased to visit Sunday last).

It surprised me, back then, to realise that lords and ladies, kings and queens might not be the admirable beings I'd read about in storybooks. And for that, the very beginning of my wokeness, I'd like to call out Uncle Vincent, a true champion for social justice. 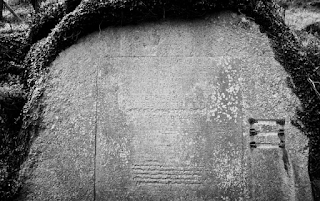 
*Those neighbours of Lizzie moved to our part of the world. Not that far from us but thankfully not within earshot.
Posted by Nelly at 11:55 pm

I can't read it at all. Darn it. What are those three digits to the right.

The stone is very weather worn and hard to read. Limestone is soft and it was inscribed 170 years ago. However, if you google Famine Memorial Garron Point you will find out how it reads.