Things Bert And I Have Argued About

Some time ago there was a regular column in The Guardian called Things My Girlfriend And I Have Argued About. The writer was Mil Millington, (I just googled that) and it was always an enjoyable read. Of course, Bert and I never argue but we used to - quite a bit. Actually, that's a lie. We still do argue but it's different now. Different because I don't take myself as seriously as I used to.

Yesterday's argument arose because he stood too close to me while I was making dinner. This is what happened.

I was making risotto from one of my new Jamie books. It was the 30-minute meal book. I might not know much about risotto but I know it's not a dish to hurry. Jamie was pretty optimistic with his 30-minute timing especially as I was expected to do a salad and a dessert in the allotted time frame. Ridic! I just did risotto and it took forty minutes.

The risotto was supposed to be mushroom but I didn't have mushrooms so I was planning to use smoked mackerel and bits of things from the garden, mostly peas and fresh herbs, flat leaf parsley, rosemary, marjoram, some lemony thing that I couldn't identify and my own garlic. The base was onion and celery both shop-bought. I also used a big glass of my own white currant wine to start it off and all was going well. Especially as I was drinking a big glass of my own white currant wine as I chopped and stirred. Bet you Jamie doesn't do that. Too many kids around for him to be drunk in charge of a high sided frying pan. When it comes to cooking and drinking I tend to favour the Keith Floyd way of doing things.

Then Bert came in from outside. He wandered over to the cooker to see how things were going which was OK with me. But then he didn't go away! Instead, he starts struggling out of his boiler suit and removing his heavy boots whilst standing six inches from me. He always tries to take his boiler suit off first and he's half caught up in it, standing on one leg, trying to unlace his boots and tottering! Tottering six inches from me and my high sided frying pan and my gas cooker! I was raging and I'm afraid I shouted at him. Something along the lines of,

Size of this kitchen, size of this house! Why stand on TOP of me whilst I'm COOKING! Wriggling out of that STUPID boiler suit *unmentionable adjective*, *unspeakable noun*.

Then he retorts, something along the lines of,

The risotto turned out very well. Delicious, in fact. I can hardly believe I've never made one before. Did I mention the Roquefort cheese I added before serving? The argument was over, finito. Mostly that's the way it is these days. Bit of a reaction to an annoyance, some might even say over-reaction, then let it go. It's almost always me who starts it. 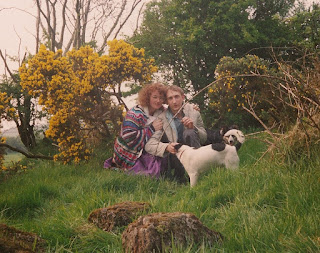 A photograph taken a long time ago. That corner is now part of a fifteen-acre wood and that was our very first dog, Danny. We argued a lot more then than we do now.
Posted by Nelly at 10:03 pm

I'd have been wearing the frying pan as a hat!

Just a perfect picture to go with the perfect risotto. :)

LS - first ever camera with an auto setting. Of course, I never noticed the briar!

Dermot, Mage - I'm seeing that picture in my mind's eye. All I can say is, suits you Sir!

When I initially commented I clicked the -Notify me when new comments are added- checkbox and now every time a remark is added I get four emails with the identical comment. Is there any method you possibly can remove me from that service? Thanks! online casino real money