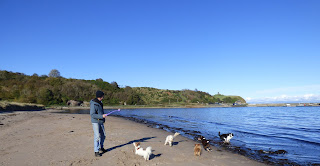 Would you just look at that! The finest of fine late Autumn days.

There was some talk today about Clint bringing the digger over to level a piece of ground at the end of the lane to allow a turning point. This, so we can go off for a day and lock the gates behind us to keep scoundrels from coming in and stealing Stag's Horn Sumachs and the like. But Clint had other things to do and Bert suggested a run to the beach with the five dogs. We're looking after Zoe's two while they are in Dingle and Roy doesn't like leaving the yard, so five it was. Our two, Zoe's two and Hannah's Ziggy. 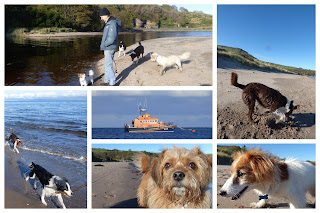 We saw something rather sad on the beach. A very recently dead seal cub. We knew it wasn't long dead because the dogs, though interested, made no attempt to roll on it.

Then we saw something poignant in the sea. A pair of seals, close to the beach, popping their heads up every so often as though looking for something. 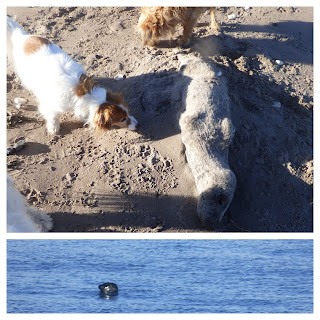 That is sad Nelly, London Sister

All five dogs. How ever did you get them clean again to get in the car. Yes, we have seals here beached all the time.