Thanks For All The Eels

One useful thing about being a long-term blogger and user of social media is that there is a record of all the important life events. Like, just how long is it since we've had eels for dinner? Well, Bonnie was alive then and she's been gone for ages. How long?  June, 2013. More than five years now. But how long since she stole the eels? November, 2007. Nearly eleven years ago. That's the last time eels were served in this house. Until tonight.

Richard and I hatched the plot. Bert had been watching a show about Lough Neagh and remembered how much he loved eels. But where to get them? We live a short distance from the biggest freshwater lake in the British Isles and it's full of eels, a delicacy exported worldwide.  Who sells them? Back in the day this one and that one could get them for you, even further back in the day, my parents got them from Uncle Paddy who lived on the shores of Lough Neagh and fished eels and pollan for a living. Nowadays, as Richard found out, they're sold directly from the Lough Neagh Fisherman's Co-operative Society.

It was to be a surprise and surprised Bert was when Richard presented him with two packs of the finest Lough Neagh Eels. His squeals of delight could be heard in the village. He cooked them just like Matty did, coated in seasoned flour, slowly in a heavy bottomed frying pan for an hour and more. Delicious, served with RJ Kerr's finest and freshest soda bread,

Did we sing The Eely Song?

Of course we did. 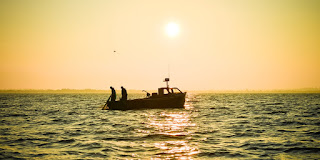 Oh, what a delightful adventure.

Would have been an even better adventure had we caught those eels ourselves!

I'd have loved to have seen her face.

Every Friday during the season, cooked slowly in the pan.

Y'know, Bert thinks I had a privileged childhood because there were eel connections.