In Need Of Cheer 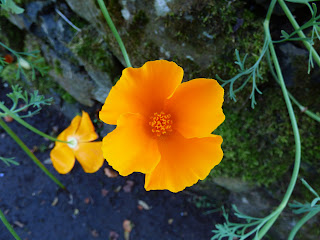 One pinch of seeds, one seed tray, perhaps two dozen plantlets, dotted here and there in the flower beds and they just keep giving and giving. Pretty generous with the seed pods too. I've seed left over from this year so shall compare how bought seed does with collected. But only if I remember to label them correctly.

Things like this are very cheering on a day when the only good news is the pregnancy of a television star and a ginger prince. A day when a bigoted right-wing party from Northern Ireland can hold a government to ransom although I actually don't care that much about that, except I think that when Sammy Wilson's utterances seem to matter a fuck then the United Kingdom is DOOMED. Surely he only exists to mock Sinn Fein and be mocked by Sacha Baron Cohen?

My experience with California Poppy back in New England was that you only had to plant it once and it would reseed itself in perpetuity. I will have to try them out here in the Southwest not that I am living in the desert.

At least you have the Ginger Prince. Here in the States we only have bad and worse.

Y'know, you're right. The Ginger Prince is almost as cheering as California Poppies. I hope he and Meaghan have a lovely baby.

One thing I did not put in my post is what kind of world is it that the Pres. (can't say the entire word as he doesn't deserve it) of the USA gets to call a woman Horseface and somehow that's OK?

I know, I know. He trash talks so that we don't pay attention to the real bad stuff. These are the worst of times.

In the famous words of professor Brian Cox (via d ream) 'things can only get better' but they may need to worse first!

We like your ginger prince here. Your poppies too.

Gingers are rather wonderful. My maternal grandmother was a Fox and all the red hair in our family comes from her side. Conincidence? I think not.