What's Going On Here Then?

I'm well on my way to making digital copies of all my photographs. Doing so brings back lots of memories but sometimes I can't remember a single thing about a picture. Where was it? Who was it? And why? I've even got three separate files labelled Who, What and Where and may even have to start a fourth file called Why. 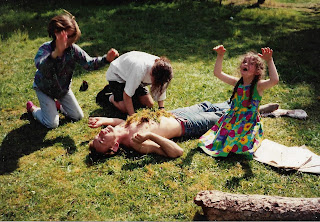 Why is Bert lying on the ground with moss and grass scattered on his bare chest? Why is his chest bare? Why is he smiling? What are the girls doing?

I remember where. It was Brocknamuckley Wood near Portglenone where we had gone for a walk. The youngest girl is a cousin. She must have been spending the day with us. Bert's shirt is off because it was a very hot day in 1992.

I imagine he is lying on the ground with a smile on his face as shortly before he was doing... 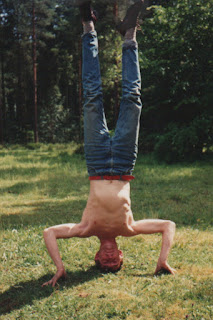 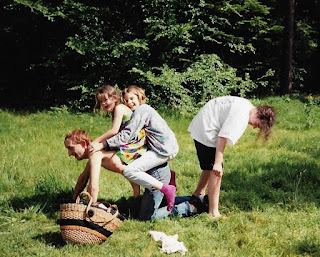 this. So he would have been enjoying the restfulness of lying prone. I believe they were playing at being pagans with Bert as their human sacrifice. 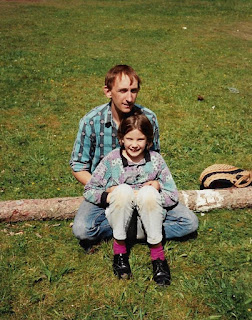 Bert and Hannah
Posted by Nelly at 9:01 pm

I'm digging through almost thirty years of JPG's and can't find what I want. LOL I'm going to post something else next month.

It can be difficult when there are so many. I have a filing system but it comes unstuck sometimes. I'll look forward to next month. Which is just over a day away. Yikes!