The High Road From Tara To Dunseverick 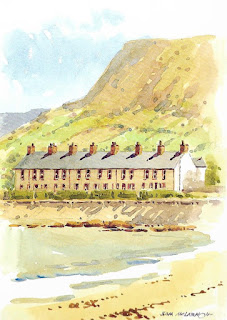 The Terrace, Waterfoot was built in the late 1860s. Nine cottages constructed with local limestone they were intended to house workers connected with the iron-ore mining industry. (Illustration by Sam McLarnon scanned from one of Matty's address books.)

On our return we drove on the other side of the glen past Ballyeamon Barn. There has been a huge amount of tree felling there and the remains of the old railway line from Ballymena to Parkmore was clearly visible. 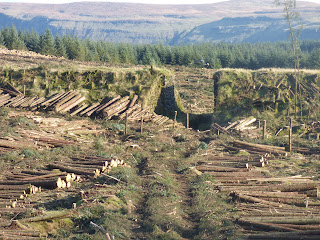 Bert took the turning to travel along Skerry East Road, a single track mountain road on the way to Newtowncrommelin. 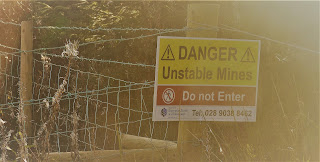 The minute he spotted this sign, he was out of the van and over the fence to peer into some collapsed mine shaft. I advised him not to in words of my own choosing and thankfully he heeded me. He wouldn't be the only man to meet his end in the iron ore and bauxite mines on Trostan and Slievenanee mountains but he'd have been the first for a long while. 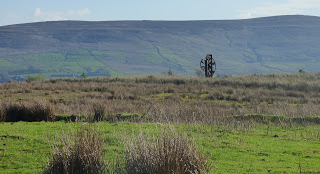 A sculpture by Ned Jackson Smyth that marks the site of a nineteenth-century Iron Ore mine on the slopes of Slievenanee in Glenravel.

Y'know this stretch is part of the high road from Tara to Dunseverick. People have been travelling this way for thousands of years.


Back home I checked it out. Could Skerry East Road be one of the five ancient roads of Ireland? Looking at Google Maps I'm doubtful. It would have made far more sense to go by Armoy.
Posted by Nelly at 10:29 pm

What a wonderful trip that was. Thank you.

You are very welcome, Mage. Always appreciate hearing from you.