Good And Not Good

Garlic is all planted and chilli jam finished. That's good.

Found a delightful half china tea set in a Ballymena charity shop for £5. Good. It compliments the delightful half tea set of china I bought for £5 in an Antrim charity shop on Tuesday. Very good. When I was unpacking it I dropped a teacup which smashed to smithereens. Not so good.

Served me right for upsetting my granddaughter who threw a spanner in the works of my carefully laid plans for Saturday. Not so good. That's already getting worked out. Good. And to console herself after our spat granddaughter hi-jacked Granda (Cousin) Bert to take her to the shop and came back with sweets that she had no need of. For her, good.

I said to Bert,

Then there is the Facebook Messaging thing I am having with my Canadian step-nephew. It's good and not so good. He thinks one thing. I think another. I suspect he likes Trump (I don't) but we have yet to discuss that and frankly, it's pointless as neither of us has American citizenship. Generally, that's not good (the spat, not American citizenship) except for maybe it's good for me to stand up for what I believe in.

A little bit of me longs to say to him. Please don't teach your grandmother to suck eggs.

I'm looking forward to discussing all this with my first husband next Thursday. Hi Mick! We're having fish for dinner. How do you like your potatoes?

(You have to ask English people that. They don't understand spuds like we Irish do.) 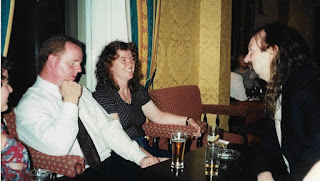 Anonymous said...
This comment has been removed by a blog administrator.
10:32 pm

Fish sounds great. Potatoes, surprise me as I am English and don't understand potatoes. Look forward to seeing you next Thursday. x

Mick, I needed that laugh. Out loud and everything.

Sorry about the spat and the sweets. You can always send some here, or hide some in the linen closet.

Mage - family life. Doesn't always go smoothly.
Deirdre - see what you mean. Not the only one in the fam whose patience is sometimes in short supply.