I Can't Believe It's Not Butter 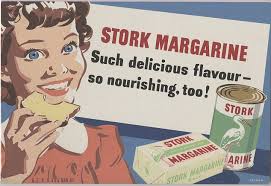 This evening, around the supper table, I made my confession. We were eating a rather nice cake at the time, one from a Mary Berry cookbook, published in 1988 - her favourite recipes no less! But those were the days when Mary Berry was just a jobbing food writer, not the huge celebrity she is today. I expect, back then, butter might have been a bit of a luxury item in the Berry household.

Now, the Nellyberts can afford butter, more especially since one of them (moi) became eligible for the state pension. The problem in the Nellybert household is that Nelly's cakes just won't rise. Martha even asked, a few months back,


So, when I found Mary Berry's Favourite Recipes, I knew there would be a method for making a cake that would work for me. I found a likely one and followed it to the letter, right down to the margarine. I chose Stork, a margarine so good that seven out of ten people can't tell it from butter.* Back when I was a child only posh people baked with Stork. My mother, with her seven children, could only afford Echo margarine but, despite this, her baking pleased her children very much indeed. Mrs Hanna from next door always used Stork. I'm sure Aunt Sadie used it too. All the well-doing farmer's wives baked with Stork, never Echo.

That cake mixture creamed like a dream, rose like a cloud, tasted delicious. Twice I've given it to the family with no complaints. This evening was the third time. A plain cake, spread with Lorraine's delectable plum jam, sprinkled liberally with desiccated coconut and served with Bert's famous thin custard. Everyone seemed to enjoy it.

Then I confessed. They started to gag. (Slight exaggeration). The firstborn googled Stork margarine ingredients even though she never uses phones at mealtimes. Obviously, this was an emergency. Turns out that Stork margarine has three kinds of vegetable oil, one of which is palm oil. It has carotene for, without colouring, margarine would just look pale and very unappetising. And it has emulsifiers, a word that always makes me feel like gagging. Oh well. Looks like it's back to butter. I'll let my loyal reader know how I get on.

Did they finish the cake without further fuss. It does sound delicious.

One of may favorite cake recipes calls for shortening not butter. Butter counter-intuitively gives you a dryer crumb. But I also use lard to make pie crust, so as you can see I am not too worried about those things.

Mage, they finished the cake.

Evilganome, I use a mixture of butter and lard for savoury pie crust. It's delicious.

Try Delia Smith's recipes for cake. I swear by the woman, in particular her early cookbooks. Her recipes never go wrong. I use butter and only butter in cake.

Claire, I went straight to my cookbook shelf and found 4 Delias. One is Frugal Food so I don't hold out much hope for butter in there but I'll keep you all posted.