Because of the avian flu outbreak, The Chief Veterinary Officer for Northern Ireland has decreed that all poultry and other captive birds are to be kept housed until further notice. Failure to comply will lead to fines and the possibility of birds being gassed. Or so I hear. A dead swan was found near Lough Beg (not that far away at all) tested positive for the virus. So it wasn't the best time to have seven new hens that needed to be housed separately from the main flock. Luckily we have two sites and it was decided by The Chief Hen Keeper of Springhill (me) that the new hens would go into the main house and the old hens would go into the old house. First I cleaned the new house which meant letting them out for a short time while Bert, Hannah and Fergus and all the dogs stood minding them and chasing away all those evil robins, wrens and thrushes. Then we got the new hens into the new house and started to catch the old hens. The five non-bantams came quietly and were transferred without incident but the six bantams and half-bantams went completely crazy, flew over all fences in all directions and it took us a long time to catch them. Bert and I both sustained injuries. The grown rooster pecked Bert's hand and drew blood and I tore my little pinky nail trying to catch one that was beating itself between the chicken wire and a row of Christmas trees. 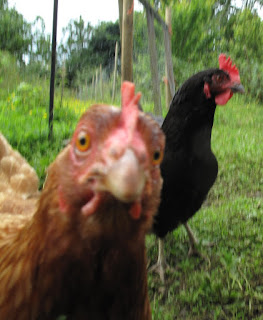 Hens are actually quite evil. There is always one that nobody likes that is bullied unmercifully by the chief hen and her favourite friends. That is the chief hen looking at you right there. The new hens are still very young, only a few months old yet as soon as the got here six of them formed a gang and wouldn't let the seventh cuddle with them at night. Horrible creatures. 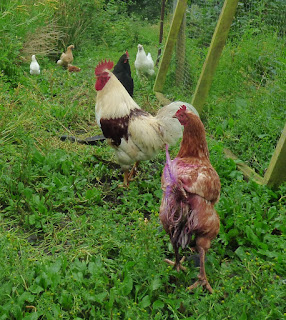 The one with the bedraggled bum was attacked by a Jack Russell and lost her tail feathers. She is much better now. She is the Chief Hen's best friend. the tiny little brown chick in the background (Fudge) is now a big rooster and the one who pecked Bert's hand. Bad chickens.
Posted by Nelly at 11:18 pm