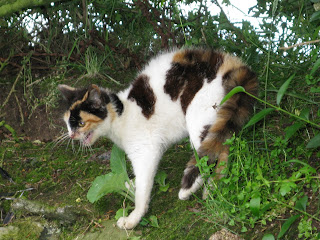 I have been feeling rather out of sorts today and, as the evening has worn on, have become downright irritable. Firstly because Bert was being so glib about Trumpishness, and then we had a caller who goes on and on about his appalling work colleagues to the extent that I start to think he should either hand in his notice or go postal on them, although perhaps clearing off might be the far better option.

When I'm grumpy my patience wears thin and I become the sort of person I really don't like. For instance, the old, old woman who jaywalked in front of the van yesterday. When I'm feeling OK with the world I'd be admiring her spirit, feeling glad for her that she was still active but when I'm grumpy - well not so much. Then there were the two blades who parked on a double yellow line causing a traffic jam on Linenhall Street because they were delivering donations to the pro-life charity shop, the one with all the posters of dead foetuses in the window. I hated those smug old bitches so much. The horrible person that is me wanted to shout abuse at them but made do with glaring instead. The righteous hags never even noticed.

I was reminded of an incident that occurred when I was working in the Henry Street hostel back when the anti-abortion shop was next door. A couple of our clients came to the office to tell me that there was an old fellow collapsed on the floor of the charity shop and that the door was locked. I went to see and sure enough there he was stretched out unmoving on the floor. We banged on the door but there was no response so there was nothing for it but to call the emergency services who had to force the lock only to discover that the man was dead drunk. He refused to go to hospital which was pretty decent of him as the NHS had, even back then, enough to be getting on with. He and the folk that ran the shop never spoke to me again which suited just fine.

So, because I am cross I thought I would look for a picture of a sweet little kitten to lighten my mood and duly opened the image folder on my external hard drive that is titled 'Cats'. I thought that one was more appropriate to my current mood. It was a feral cat we saw whilst exploring Pearlie's homeplace a good few years ago. We had the dogs with us and she didn't like dogs.
Posted by Nelly at 10:40 pm