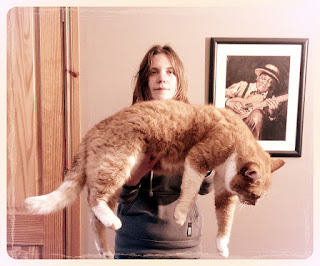 The internet is a weird and wonderful place what with cute kittens, grumpy cat and pictures of giant moggies. So, last Sunday we decided to create our own big cat picture. It helps that Fred is already a big fellow and that Hannah is slender but Fred is not quite the giant that he seems. Still, a far cry from the day that I found him, a little ginger scrap of a kitten, abandoned on a busy road near Kells. He's grown some since then.

Today has been a very idle day. Took a phone call from Martha who had a school report to do on the sort of toys the older generation played with when they were children. I told her about playing with Bunty paper dolls and we have decided to make some when next she is over.

Evie wanted to talk too. I asked her if she'd been anywhere at the weekend.

Yes. We went to Belfast.

Oh, that sounds fun. Where did you go?

We went to a Build-a-Bear workshop.

Lovely. Are you going to get a Build-a-Bear?

I protested against Trump.


I hardly had words. She was so matter of fact about it. I'm sure I didn't know any political figures when I was five. But then, back in my day, celebs didn't become politicians.

When I was five Dwight D. Eisenhower was the President of the United States, Harold Macmillan was Prime Minister, Éamon de Valera  was the Taoiseach and Sir Basil Brooke was the leader in Stormont. I think I might have heard Dev talked about but not the others. Then, when I was seven, JFK became the President and I certainly remember that. He and Richard Nixon were the first politicians I was properly aware of. Just think, Evie's first is Trump and she's already out protesting. You go girl!