God! This daily blogging is tough. So hard to think of a fresh idea. I have been working on a post about living beside the moss but it needs a bit of research, especially as I cannot even find what the bloody place is even called. I have a faint idea I might have researched it before and that it might even be on this very blog! Time to research Nelly's Very Own Garden.

Just took a break to drink tea, eat a pear and watch Archer. But before that I researched my own blog to see if I could find out the actual name of our very own homeplace bog. Didn't find it. But I did find these pictures.... 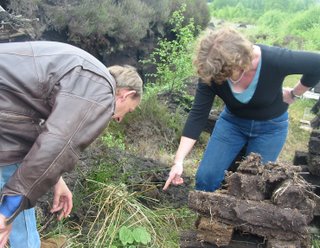 It was 2006 and I was taking a walk in the moss when I discovered a miniature rhubarb plant. I was astonished as I'd never before seen rhubarb growing there. Surely the growing medium would be far too acidic. Bert didn't believe me so next time we were in Drumkeeran we went searching for it. 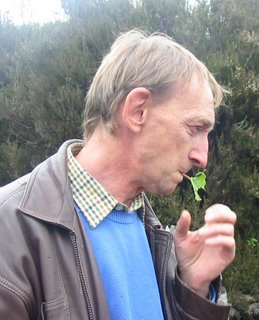 Bert has a little nibble. Definitely rhubarb. I never saw it again and it remained a puzzle until, six years later, I met Bobby. 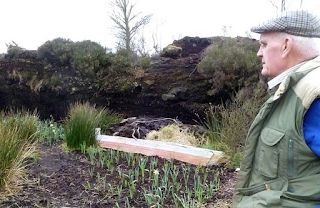 Bobby is Lord O'Neill's man on the ground, the mossy ground, to be precise. The day I met him he was admiring a patch of narcissi that he'd planted the previous autumn. He told me that his wife was throwing the bulbs out so he thought he'd plant them in the moss to see how they'd do. Now, as far as I know, he just got the one year out of them as I never saw them again. I did ask him If he'd ever tried rhubarb and he said he had but it hadn't made much of a plant. The mystery solved!

The next picture has absolutely nothing to do with horticultural experiments in peat bogs but it was taken in the moss, not Lord O'Neill's side but Paddy Heffron's. 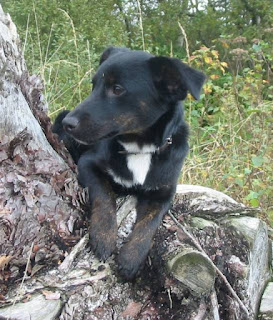 Kerry, a sweet little dog that belonged to our friend John F. She's long gone now for this photo was taken in 2004. It was one of a number of pictures taken around that time that disappeared in a computer crash. I'd forgotten it was stored on my blog.

Here's another that I saved taken that same day. 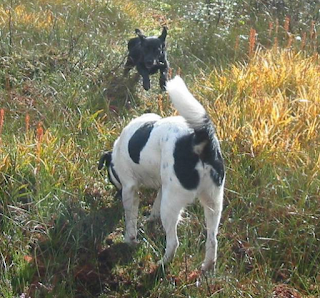