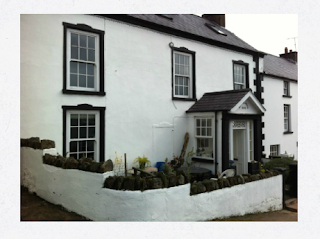 It was around half-three this afternoon that I pulled into a little supermarket on the Cushendall Road that I realised I had been up for over ten hours. I'd just got back from Cushendall where I'd dropped Hannah, Ziggy, guitar, walking shoes and assorted reading material to the house pictured above where they planned to spend two days reading, making music, walking and general chilling. I, on the other hand, was having to do stinking grocery shopping as Bert had requested 'nice soda bread' to eat with his haggis.  Ah well, when I'd got that done I could go home, spend a while setting the house to rights after the five girls dressing up and messing about session the previous evening. Then I would chill, enjoy some peace and quiet, just the two extra dogs to look after. Sure, five dogs aren't that many.

So I went into the shop and was immediately angered by its air of crappy hopelessness. And the only soda bread on offer was Ormo which does not meet Nellybert's standards and the milk was over-priced. I was so annoyed that I refused to do any shopping there and walked out past the surly check out lad in glowering, stompy silence. At least I would soon be home. A quick stop at the garage for the necessities of life and where I got teased for my R.J. Kerr soda farl addiction then home where I was enraged to find that the gates were shut. Had to stomp out to open them, drove into the yard, saw two cars where no cars should be and saw and heard at least two small boys roaring through the garden. There were even smaller children in the sun room so I went in the back door, sneaked up the stairs and began gently banging my head on my bedroom window. I stood like that for about five minutes, decided I wasn't going back downstairs to fail miserably at pretending to be pleased to see people. So I got into bed with the Guardian and waited for them all to fuck off. There were door slammings and the sound of small children being toileted and all sorts of disturbing noises which stressed me out but still I stayed in bed. And eventually, maybe an hour later, the house cleared.

I got up and enquired of Bert who the second car had belonged to and it turned out that it was another young couple with two children (there had been six children down there!) and this young couple I'd asked around (anytime) the last time I'd seen the Daddy in his shop. Oh well.

It's been a stressful few days. So, if you're reading this, and you know me and you were thinking of dropping over tomorrow. Don't!
Posted by Nelly at 10:24 pm